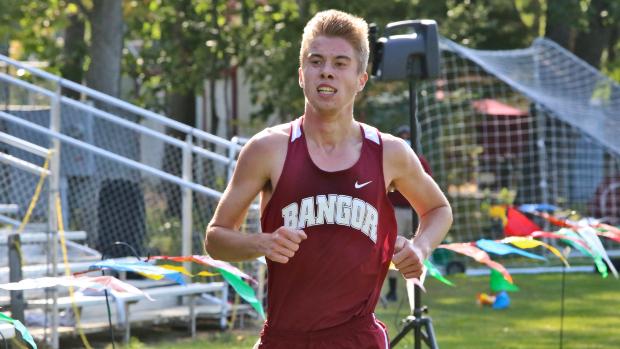 Bangor senior Gordon Doore running his last race on his home course at Bangor High School broke the course record with his 16:08 winning effort. The race featured three of the top harriers in the state with #4 ranked Abbott Valentine, #6 ranked Daniel McCarthy and #7 ranked Doore in the Maine MileSplit Boys Watchlist.

Earlier this fall Doore and Valentine squared off on the same course on a muggy day, while McCarthy didn't race that day. With the humidity gone, leaves covered the course this time but that didn't stop a great race from unfolding.

Gordon took the pace from the start with his teammate McCarthy in toe with Valentine a few strides back in the opening meters of the race. By the time they returned to the fields for the finish Doore had opened up a ten seconds lead with 800 meters left in the race. Valentine and McCarthy both put in a strong finish to make it close at the end but couldn't catch Doore who stopped the clock first. The time improved on his previous course effort of 16:24.98. Valentine continued his strong fall improving thirty-four seconds on his last race at Bangor. McCarthy running on his home course for the first time this fall clocked a respectable 16:14.18.

Behind the top three Bangor, senior James Fahey broke 17 minutes with his 16:47 effort while another Ram Fritz Oldenburg rounded out the top five with his 17:06.18.

The second-ranked Bangor boys showed they will be a top contender for the Class A state titles in November as they toppled Hampden Academy 21-41 while their top five runners averaged 16:51 for 5k.