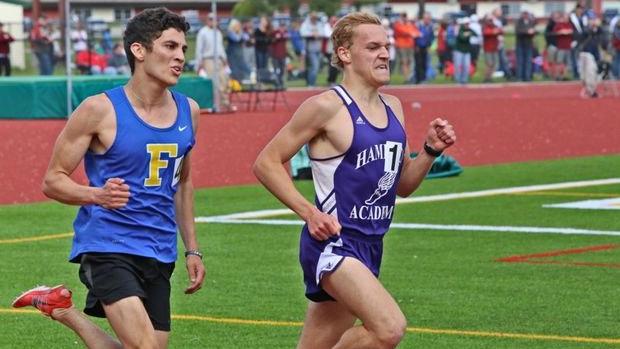 We've been working to expand our vast results database this summer adding in several state championship meets dating back to 1994, and the plan is to continue throughout the summer.  While we don't have every team's top athletes of all time we wanted to take a look at the data we had to see what programs (schools) had the top performers in every track and field event outdoors.

Today we are going to take a look at the boy's 3200m. Below are the top five programs based on the results we currently have in the database. For the complete list of 96 teams visit the link below.

Falmouth has taken over the top spot as the top 3200m program in the state. The Yachtsmen have five athletes at 9:36.92 or faster. Brandon Bonsey leads the way with his 9:27.67, while Jeremiah Sands is right behind with his 9:28.62. Senior Logan Ross jumped up to fourth-best in Falmouth history this spring with his 9:34.46 effort. Falmouth has a 9:32.21 average for their scoring five and seven athletes at 9:41.61 or better.
The Dragons of Brunswick have surged to the second spot with 2021 graduate Tyler Patterson's 9:25.74 effort from this spring. Will Geoghegan tops the list for Brunswick with his 9:23.01 personal best. Brunswick averaged 9:31.57 for their scoring five.

Rounding out the top five is Cheverus led by Ryan Fenton's 9:23.23 personal best. Right behind him, Jack Terwilliger clocked a 9:23.40 as the Stags averaged 9:35.22 for the scoring five. As we add older results expect the Stags to move up the ist.