New Balance Indoor Nationals - The Scarborough boys sprint medley (Noah Batoosingh, Parker Killiard, Jayden Flaker & Zachary Barry) shattered the state record with a 3:32.33 effort. The Red Storm posted the fastest time in section five and their time placed them third overall in the championship as they earned All-American honors. Batoosingh led off with a 24.19 carry, Killiard followed with a 22.84 effort, Flaker moved Scarborough into first with a 50.09 carry, and Barry closed it out with a 1:55.21 carry on the 800m leg. The previous state record was 3:36.94 set by Scarborough back in 2019. 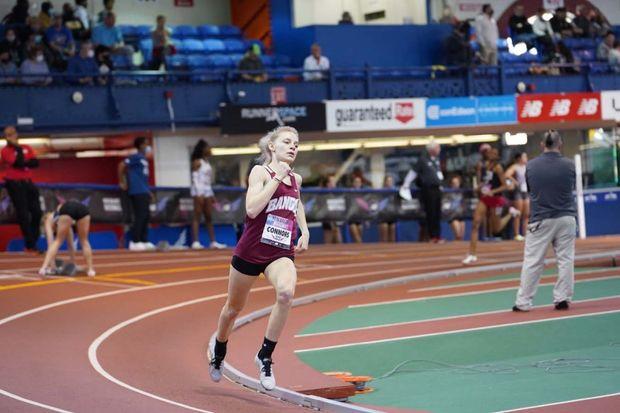 Bangor junior Anna Connors scorched the track in the rising stars 400m. Connors dominated the second section with a personal best 56.46. Her time was the fastest amongst the 12 heats and she will advance to final tomorrow evening. Anna's time moved her second fastest all-time in Maine indoor history.

Class A 2 mile champion Megan Randall of Bangor finished 66th in the championship race with a 11:09.97. Speaking of Gorham the 4x200m relay team of Maddie Michaud, Alyvia Caruso, Emma Green and Sydney Connolly competed in rising stars race clocking 1:47.03 to place 11th overall. The time moved the Rams to third best in state history just .14 off the all-time record, the mark was a new school record.

Jayden Flaker of Scarborough set a new state record in the 60m hurdles in the preliminaries with a 8.10 performance. Flaker overcame a slow start to power his way to second in his section. His time was sixth best overall and he will compete in the 60m hurdle final on Saturday.

All-American honors were earned in the Mile racewalks. In the girls race Ashley Poulin of Gardiner walked to a third place finish (7:55.86) while Thornton Academy's Maya Judice was fourth (8:26.96). In the boys mile racewalk Rowan McDonald of Bonny Eagle earned All-American honors with a fourth place 7:32.70. Gorham's Lucien Beardsley was the initial winner in the event but was eventually dq'd for loss of contact.

D1 Indoor Nationals - Nyagoa Bayak of LSU will compete in the high jump on Saturday at 12:30p.