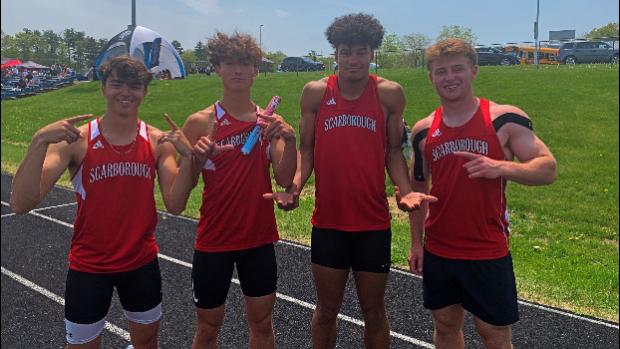 The boys 4x100m state record of 42.99 is no longer as the Scarborough team of seniors Nicholas Connolly, Jayden Flaker, Noah Batoosingh and junior Parker Killiard took .09 of the five year old record with there 42.90 winning effort at the Cumberland County Championship meet. Connolly the defending Class A shot put champion led off for the Red Storm passing to Flaker on the second leg. Flaker handed over the baton to Batoosingh who then completed a flawless pass to Killiard.

The previous record mark was set by Scarborough at 2017 Class A state meet by the team of Ben Hatch, Jarett Flaker, Ben Batoosingh and Sam Rusak. On Friday at a SMAA regular season meet at Gorham High School, Falmouth equalled the second fastest time in state history with a 43.32. Less than 12 hours later the Red Storm responded with a new state leader. Just like the team in 2017, Flaker and Batoosingh got the job done (Jarett ran second leg, and Ben ran third on the 2017 team), the younger siblings now have the bragging rights at the dinner table.