We'll bring you the action from the 2022 New England outdoor track and field championship from New Britain, CT. Class B champion Matt Charpentier of York placed seventh with a toss of 54-3 1/2, while Class A runner Amir Broadus of South Portland was eighth with a best throw 53-9 1/2 York's Lexi Brent the Class B champion finished 7th running 15.61. Makenna Drouin of Edward Little the Class A champion made the final but choose not to contest the final after running a personal best 15.18 in the trials. Emma Green of Gorham was the runner-up clocking 12.23 into a -1.5 headwind. Makenna Drouin of Edward Little was 8th in 12.49 while Caroline Fallona of Scarborough was ninth in 12.69. Mia-Claire Kezal of Thornton Academy used a big kick over the final 100m to win the 1600m title in a personal best 4:56.70. Delaney Hesler the Class A champion was fourth in 4:59.47 while Bangor's Megan Randall clocked 5:03.27 for 7th. Cape Elizabeth sophomore Hadley Mahoney ran huge personal best 5:03.55 for ninth.

Class A state 4x100m champion Falmouth sprinted and passed its way onto the podium with a fifth place finish clocking 43.20. Cheverus placed eighth in a seasonal best 43.3 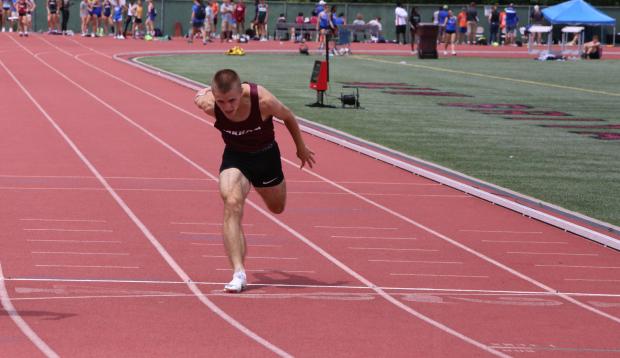 Class A state champion Andrew Farr of Gorham added his second runner-up finish of the day clocking a personal best 48.27. The mark is the the second fastest in Maine outdoor history. Edward Little junior Tudum Monday made his second trip to the podium on the day running 39.84 to place fifth in the 300m hurdles. Jacob Ramos of South Portland surprised everyone running 1:53.92 to win section two of the 800m in a huge personal best effort and moving him to sixth best in Maine state history. His time was good for third overall

Gorham senior Andrew Farr capped off his busy day with a personal best 21.95 to win the New England 200m title. The time is the third fastest in state history and was run into a -1.7 headwind. Class A champion Mikaela Langston of Mt. Ararat finished as the runner-up leaping 37-7 1/2 in the triple jump. Bucksport's Natasha Monreal placed 4th in 36-2 1/4 while Brunswick senior Kaeden Green was on the podium with a sixth place effort 36-1 1/2.