The 78th New England Championship meet will take place on Saturday at the Twin Brook Recreation Park in Cumberland, ME. The course is challenging 5k through open fields and woods, add in some wet and muddy conditions, and you have a great place for a xc meet, just make sure you bring your half-inch spikes. With 15 returning All-New England runners back the girls race will be very competitive, this includes defending champion Elle Purrier of Richford, VT.

Maine athletes have done very well in the New England over the past 4 years, with the meet on home turf expect the homestate to be well represented again. While the individual race is expected to be a good one the team race maybe even better with Coe-Brown Academy (#4 in NE), squaring off against Barrington, RI (#5 in NE) & Champlain Valley, VT (#6 in NE). Let's take a look at the top individuals & teams below Brown has run undefeated all season long in Maine, breaking Abbey Leonardi's meet record at the Maine Festival of Champions running 17:56. She has run alone at the front of the pack all year long it will be

interesting to see how she handles a little competition. Expect Brown & Elle Purrier to battle back and forth for the NE title. Nagy won the Class A title in Maine in only her 2nd season of XC. Her only loss on the season came at the hands of Bethanie Brown. The senior who didn't get to train at a full level due to an injury that kept her out of the first part of the season and then limited her training after that still ran at a high level. Erzsebet choose not to run the NE's last year opting for rest instead. She ran a Maine outdoor record of 2:13.5 for 800 last spring, so if it comes to a kick she's dangerous. Erzsebet ran the 2nd fastest time at the Maine state meet, her time of 18:50 was one of only 2 under 19 minutes. 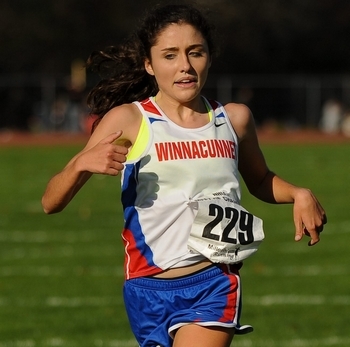 Pelletier won the NH Meet of Champions in convincing fashion as she avenged a loss at the D1 champs the previous week. Alexa ran 18:15 to outdistance the competition by 17 seconds . The week before she was the D1 runner-up as she finished  6 seconds back of Elizabeth Conway. A year ago she was sideline with a stress fracture that caused her to miss the postseason, a year later she's in contention for one of the top spots in the NE Championship, pretty good as she was a convert from soccer 2 years ago. Conway ran to a 9th place finish as a junior, she's had a strong senior season to date. She won the NH D1 State championship by 6 seconds over  MOC champion Alexa Pelletier. Last week Elizabeth didn't get the start she was hoping for and when Pelletier made her move couldn't match her. Expect someone with Conway's experience not to get stuck this week, and get out with the leaders.

McMillan just a freshman has had a great postseason run to date with a 1 second win at the RI Class A State meet 2 weeks ago, and then a 10 second win a week later at the RI State Championships. The freshman clocked her fastest time of the season of 18:22 last week. Emma who cinsiders herself more of swimmer, has shown she's pretty good out of the pool. Not only did she win the individual titles, she led her team to victory the past 2 weeks, can she do it for the 3rd week in a row?

Wilbur has been the runner-up in both the Class A Chanpionship & the RI State meet the past two weeks. She ran within a a second of the chamion Emma McMillan at the Class meet. She has battled back and forth with McMillan the past 2 meets, so expect more of the same this weekend. 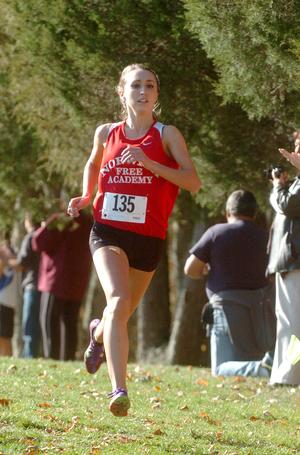 The senior has improved greatly from a 55th place finish in the NE meet a year ago. This year Lenehan won the Class LL title in comanding fashion with a 26 seconds win. She followed that up with a 3 second win at the CT State open on Sunday. Look for Briana to get out hard early, she won this past weekend with the same strategy as she held off a fast closing Chrissy Bendzinski.

Bendzinski who placed 97th a year ago, has taken the her running to the next level. The junior placed 3rd in the Class MM Championship running 20:06, she had the finest race of her career to finish just 3 seconds off the win in the CT State Open meet on Sunday where she ran 19:12 a seasonal best. She finished ahead of all the girls who beat her at the class meet, and appears to peaking at the right time. Purrier the defending champion is one of the inidivdual favorites, she dominated the VT D3 state meet running 18:37 on the tough Thetford Woods course, her winning margin was 2:22. Overall she was the fastest in the state by 31 seconds. Elle who qualified for NXN last fall has been even better in 2012. Last year she won the state meet in 19:11 on the same course. The senior will certainly get out in the lead pack and look to make it 2 in a row. Purrier's strength will help her on the Twin Brook layout as well Spillane is a big meet racer, a year ago she placed 4th as a junior.  She won the VT D1 state title running 19:07 to defeat her teammate Autumn Eastman by 15 seconds. Taylor will be a key for her team's success. Champlain Valley enters the meet seeded 6th in NE, they have won the last 2 NE titles. Spillane ran the fastest time at the Manchester Invitational to win the Elite section earlier this fall, her winning time was 18:07. Shannon Murdock- So Exeter, NH place 3rd in the NH MOC of Champions

Nyajock Pan Sr South Portland, ME  Pan was the Class A runner-up, Won the Class A WM Regional

Kirstin Sandreuter Jr Greely HS, ME  Sandreuter was the Class B runner-up, won WM B Regional

Brittany Bowman Jr Camden Hills, ME Bowman ran to a 3rd in the Class B meet, she was EM B runner-up, was 17th a year ago Two time defending champion Champlain Valley, VT will be shooting for a 3 peat. Champlain Valley won the VT D1 state meet with ease scoring 31 points & averaging 20:19 @ Thetford Woods. A year ago they avereaged 20:32 on the same course to win as well.  They have front Taylor Spillane leading the way with a strong running mate in Autumn Eastman. They enter the meet ranked #6 in the northeast

Repeating won't be easy as NH Champions Coe-Brown Academy have a very strong squad. Coe-Brown averaged 19:09 last week on there way to a dominating 43 point win at the NH MOC, they had 4 girls at 19:12 or better. They enter the meet ranked #4 in the northeast

Also watch out for Barrington, RI who won the RI State meet by 40 points over LaSalle Academy. They are ranked #5 in the northeast, they averaged 19:02 in winning with 5 runners in the top 20, which included 4 of the top 12 overall.  A year ago they placed 5th in the NE meet

LaSalle Academy #9 in the northeast will be looking to rebound after the resounding defeat at the RI Champs. They were the NE runner-ups a year ago. They averaged 19:24 in their runner-up performance at the RI Champs.

Bonny Eagle the Class A Champions are the top Maine team

Ridgefield, the CT All-State champions is the top team from Connecticut