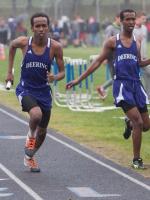 University of Southern Maine Gorham, ME

Salute to Seniors: Yahya Hussein Deering HS...
In the coming weeks many of our seniors will head out to start their college careers both athletically and academically. We wanted to salute them one more time in this special feature and say thank yo...

MTCCCA All-State Cross Country 2014...
As chosen by a panel of coaches from around the state here is the Maine Track & Cross Country Coaches Association All-State team 2014....

XC Preview: Class A West Boys Returners virtual meet...
As part of our XC preview this year we are doing a virtual meets of the returners from last year based on 5k times for each class. Today&#39;s virtual meet is the Western Maine Class A Boys, see who i...