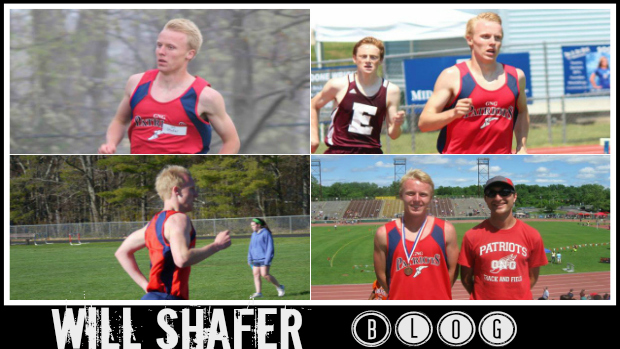 Follow senior Will Shafer as he embarks on his senior season at Gray New Gloucester HS. Shafer is one of the top distance runners in the state, he was the Class B state champion in the 800m, and ran the second fastest 1600m in the state in 2013. Shafer finished 10th in the Class B XC state championship last fall, see what he's doing to get to the next level

XC is over. I never thought that I would be sad to hear this statement, however this past season has swayed me a little, I must admit. For my first three years of high school, cross country running did not come easy to me, nor did I particularly relish 5K races. Entering senior year I still had my doubts. States and regionals were both to be held at Twin Brook, a course that had been my demise throughout high school, on which I boasted a docile 17:50 personal best. But something special happened this year. The team came together as the post season got underway and the momentum kept building through States, and in my case, continued thorough New England's this past weekend.

First things first, States. Going into States, the GNG boys team got a little bit of a boost, the combination of an article on us in the local paper and a lively team dinner. At the team dinner our two coaches courageously followed through with their promise to dye their hair blonde if we qualified for States. The original plan was for the entire boys team to dye theirs blonde, except for me as a natural blondie. In my case, I would rock jet-black hair to complement a team of artificial blondies. This plan fell through, to my relief, and it was just our coaches sporting fresh new dews on Saturday morning. Needless to say, the team was ready to go when the gun went off. I was thrilled with my 4th place finish and the team finished 5th in a very competitive Class B race. Following States, I was finally able to say that I banished my Twin Brook demons, dropping my time on the course from 17:50 to 16:32 from junior to senior year.
Picture of the boys team at States, including the blondies. 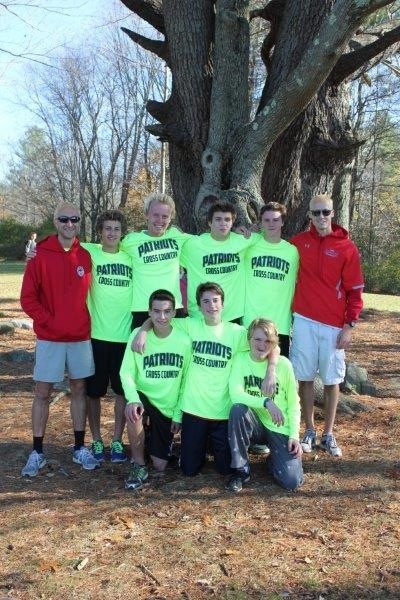 My season continued an extra weekend, taking me down to Derryfield Park in Manchester, NH for New England's. Entering the race I set two goals for myself: go sub16 and earn All-NE honors (top 25). I knew virtually nothing about the course, I didn't know if I should wear spikes or flats, to start hard of slow, to attack the ski hill or hold back or anything in between. The only thing I knew was that I would run fast. I had a funny little feeling all week that I was going to have a breakout day. Once the race got underway, I stayed conservative for the first mile, hanging in around 40th as we began our ascent of the ski hill. I began to start working my way though the pack on the upper loop, getting up to about 29th at the two mile mark. Finally, I let it loose. I closed with my fastest in-race mile all season, around a 4:50, to move up to 17th place and run a PR of 15:53. New England's was the most memorable XC race of high school for me, it's a memory that I will treasure for the rest of my life, a great ending to one chapter but hopefully only the start of another!
Mainers in various states of celebration at NE's. Photo credit to Peter Doane's mother 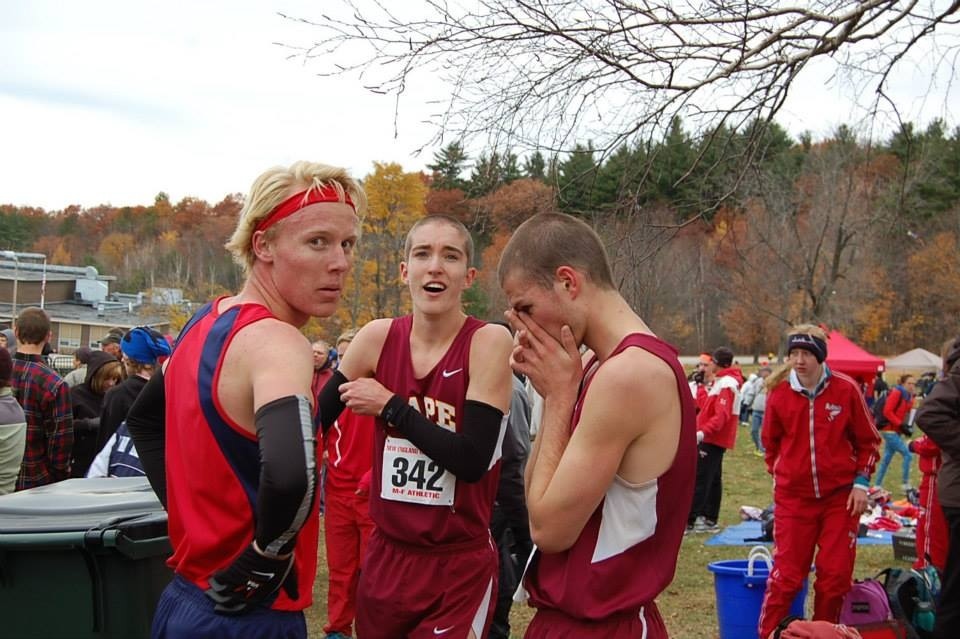