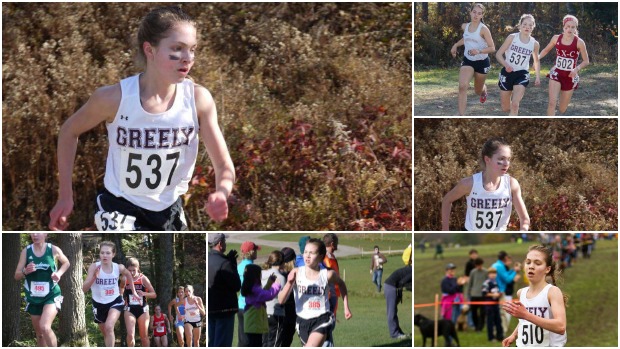 Follow Greely HS distance star Kirstin Sandreuter as she blogs about her senior xc season. Sandreuter was the Class B state runner-up last fall, and is the top returner in 2013. See what it takes to be one of the top distance runners in New England & the Nation

Although I am running(not literally!)on just about an hour of sleep in the last 24 right now, I couldnʼt be happier. I am returning home from the Footlocker XC Nationals in San Diego, CA, which was without a doubt one of the most memorable experiences of my life so far :)

The race itself flew by(after all, it took up only 18 minutes of the whole amazing weekend), but the details are so clearly ingrained in my mind that donʼt think theyʼll be fading anytime soon. What an exhilarating atmosphere to be a part of -- not only were the live crowds lining the course some of the most enthusiastic I have even seen, but I knew how I had incredible support from all my friends and family watching at home. I couldnʼt help thinking back to the past few years Iʼve sat by my computer watching eagerly as such idolized older runners as Abbey Leonardi and Emily Durgin have graced the screen. It was certainly surreal to realize that during those 18 minutes, I was not the one watching, but the one who was actually on camera, pushing my hardest to represent the Northeast, the State of Maine, and Greely High School as best I could.

In the end, I finished 20th, smack dab in the middle of the field. As much as I wouldʼve loved to achieve a PR and the honor of All-American status, I know that thereʼs a long road of opportunity ahead of me, and every single race I run will make me stronger in some way.

That said, I was thrilled to have the opportunity to compete against many of my most talented peers -- I feel blessed to have met so many inspiring people and witnessed individual performances that blew me away. One was a girl from Germany who had never even heard of Footlockers before she came here, but decided sheʼd give it a shot for the sake of the trip, because “California seemed much more exciting than Illinois!” Although she said she definitely wasnʼt used to the conditions of the course, she ended up finishing strong just a few spots ahead of me -- way to go, Malin! Also, a HUGE shout-out to my incredible Northeast teammates -- Tessa Barrett took the lead and earned the championship title, Hannah Debalsi showed her fearless resolve as runner- up, and Anoush Shehadeh recovered from a face-plant at the 800m mark that left her in 39th place, only to work her way up to 4th place overall! These top performances, along with All-American finishes from Brianna Schwartz and Brianna Gess(the best freshman in the race!)and strong efforts from the rest of our girls earned us the Footlocker Team Title for 2013 -- GO NORTHEAST!!

And of course, a huge congratulations to Dan and Josef -- what an exciting race to watch, with two Mainers finishing strong in the top half of the field!

played a quirky pre-race pump-up game with Alysia Montaño, and shook Kara Goucherʼs hand -- yeah, you could say I was a little bit star-struck ;)

Above all, what struck me was the clear and obvious sense that these elite athletes are real people. As much as I knew beforehand that theyʼre all of course human, which inevitably gives them something in common with the rest of us, the interactions that I shared with these Olympians really drove home the fact that they are simply “normal” men and women who have pursued their passion with unprecedented heart and dedication -- I think that every single one of us has the potential to reach the highest levels we are capable of, and there is so much we can learn from those who are making it happen.

One athlete in particular whoʼs philosophy impacted me a lot this weekend was Sara Hall. Speaking to us the night before the race, she shared with us a couple of things that have helped her evolve as an athlete as sheʼs grown. One was the fact that sheʼs realized God always loves her, whether she or not she meets certain race goals -- knowing that there truly is no cost of failure can remove an immense amount of pressure and help to give us confidence to hold nothing back in pursuit of our passions. Another thing that Sara mentioned helps to get her psyched to race is the image of husky sled dogs -- their eagerness to be “the chosen ones,” chomping at the bit pull the sled as they were born to do, is exactly how we should feel before our races... filled not with anxiety but joy, thrilled at the opportunity to do what makes us come alive.

So I think the biggest take-away Iʼd like to share with other runners is the power of staying joyful in our sport. I got pretty worked up at the Regional race, knowing how badly I wanted to qualify for Nationals. But reflecting on that race, I know it wasnʼt the end-all, be-all and though it was a huge privilege to make it to Nationals, my future didnʼt depend on that one race. But since I did earn the chance to compete in San Diego, I focused more than anything on loving every minute of it. I know this same philosophy can also be employed at any old regular season meet, because whether or not there are fancy uniforms, media coverage and elite mentors involved, we runners do what we do because itʼs fun. Remembering that in the face of challenges is perhaps the only way to truly thrive.

As I was writing this on the plane ride home from San Diego, lots of thoughts were running through my head. Yesterday was a definitely a turning point for me, as I progress through my senior year of high school -- “last” season [ my favorite :( ] down, two more to go before I enter a collegiate program! THANK YOU to all the incredible people who have given me support and encouragement throughout high school and especially this fall. You guys are a huge piece of my motivation every day with the amazing things you do yourselves! Good luck to all other seniors who are hearing from their colleges of choice this week about Early Decision admission -- remember that no matter what happens, you have great things ahead of you :) And best of luck to everyone as the first few meets of indoor come upon us... canʼt wait to see you on the track!