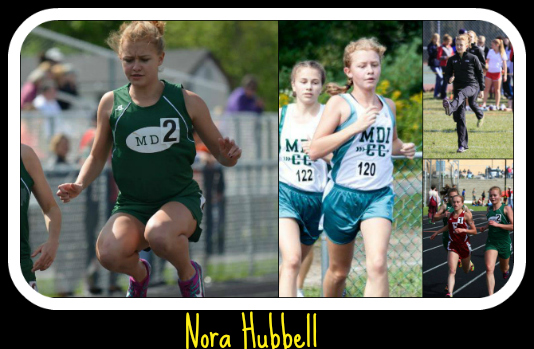 Follow Nora Hubbell formerly of Mt Desert Island as she blogs about indoor season. Hubbell fInished 9th in the Class B State  XC championship in 2011.

Every time I start to think that I might have this blog thing down I manage to surprise myself. I started writing this blog almost three weeks ago now, on my birthday (happy birthday to me, I’m seventeen now), but I realized then that I actually didn’t have anything to write about, which kind of defeated the purpose of writing an actual blog. So, here I am, sitting in a hotel bathroom in Brunswick at 12:30 AM, writing a blog.

This month, there has been very little running related activity in my life. For a week and a half following the state meet I had a couple of different injuries. I don’t think these were caused by running my two mile repeats on the state meet course without shoes (I only mention this because I think a number of people noticed and were confused) but because I fell asleep in a weird position on the car ride home, which lead to the outside of my left calf becoming tight to an almost debilitating extent. When that began to start feeling better my knee cap became swollen and bruised, which caused me to take more time off.

Then, my dad and I spent basically a week and a half traveling to New Hampshire and back to Maine, then to Massachusetts and back, without much opportunity to run. All in all, I’ve basically taken three weeks off at this point, and because of this training gap I’m not going to run at Footlockers and instead use this as a break so I can come off of this and start training for indoor, which is what I’m basically starting to do now.

The better part of this past week, when I’ve been at home, has been spent trying to make reasonable decisions about the next four or five years at my life. I’m terrible at making decisions. I can barely pick out running shoes, never mind decide what I want to do with my life. Despite various amounts of confusion, and one 2 AM run to attempt to stimulate my decision making process, my plan for the next couple years remains where it was during my last blog post, which is incredibly relieving to me, mostly because I didn’t want to fill out more applications for the moment.

On the up side, I have been training more since I got home. I have some of the first actual workouts for indoor track, I’m no longer injured for the most part, and I would be in great shape if I hadn’t forgotten to bring shirts with me for this trip. At this point, all I need is a team for some proper company, although I did go aquajogging and do an amazingly terrible core workout with one of my friends today, which was a pleasant change.

It’s almost 1 AM now so I should probably go to sleep so I can get up at a reasonable hour tomorrow. I hope you’re all having a great Thanksgiving break and have a good start to your indoor track seasons!