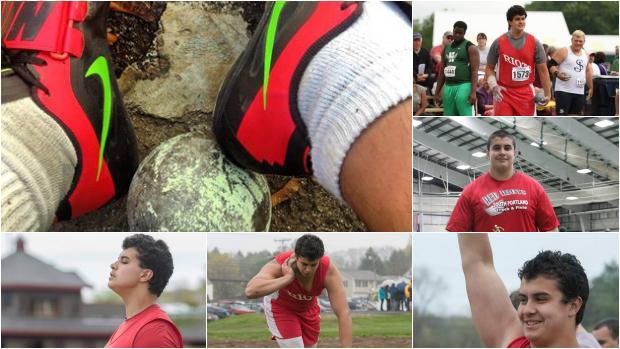 Hey everyone!
Practice starts today and I'm so excited! My training has been going great and I feel great. It feels so weird facing the fact that I'm about to face my last two seasons of High School Track and field, but it was bound to happen, as time sure does fly. The biggest thing for me this year is to stay competitive and just build memories with my teammates, to just make memories that I'll cherish for ever. Sure, track is known as an individual sport, but I love my team. We just work hard, have an unbelievable enthusiasm, and compete with everything we have, and it just doesn't get any better than that. It feels so good to be part of team..a family like that.
Speaking of family, I'll be joining a new one next year around this time. I sure you all have heard but I'll be taking my throwing abilities to Iowa State University next year! I went there on an official visit after my second football game of the year, and I instantly feel in love with the place, the people and the coaching. I was imagining a place with just corn, and tractors and what not, but as my flight was landing..Kidd you not, I saw trees, all sorts of trees. I saw a place that reminded me of home. I saw the campus and just how beautiful it was, the size of the place, the beautiful facilities, the welcoming team, coaches that care about their athletes as much as they care about the athletes success on the track (ring in my case). I just cant wait to compete at the division 1 level.
Summer as always was the biggest toll on my body, just trying to keep up with throwing and focusing on football at the same time. I threw as much as I could during pre season, and before pre season I would just throw before our morning practices (5:00 am or so). Many quit football or any fall sport to focus on track if they get to a high level but I didn't want to miss out on my senior year, I would've regretted it very much, but now that our season had come to an end, I can just focus on throwing and getting as good as I can from now, until the end of college (hopefully even after college).
This year I'm going to just focus on training, getting stronger and faster, and even more into my technique. I'm going to look for some good throws in the regular season and train through some meets, and look to throw some big marks in the meets that counts, and that's in the championship part of the season. As good as a career I may have, I have never won an Indoor state title, nor have I ever been to New England's indoors. I'm going to train for setting big PRs and winning those meets, and even go for a national title.
Training through my meets means, to stay on my weight programs and plyometric work outs through the meets and build on my strength and technique and cut down the training around championship season. That'll get me ready to win those meets and go in to outdoor track feeling good. I'd say I feel the need to do this because I have no pressure on myself this year. My last indoor meet last year, I threw 62'4" which eclipsed the long standing indoor record, which was on my mind every throw I took indoors and I added so much stress to myself, just telling my self "I need to break it now", and I think when I went to the state meet indoors, I was just hungry for a state title and a state record but forgot about capturing the win and fouled out. My best throws came in at the end of the indoor season and I'd say that'll be the case this year. I think a big reason for why it takes a while for me to improve marks in indoors or throw farther is because I'm not really in the form I could be in because of the lack of throwing I have had due to football, but everything will be fine as the season kicks off.
Back to the putting pressure on my self part though, I am glad I've set my own records in both indoors and outdoors. It just takes the weight off my shoulders and gives me the opportunity to A. Have fun for once and B. Compete with my self and not someone else's record. This just gives me a chance to breath, and keep my mind cool during my throws this year.
I hope everyone has a great first week of practice, and to just work hard and have fun, and to the seniors, let's just cherish every second we have, it's going to fly by quick!
- Danny Guiliani