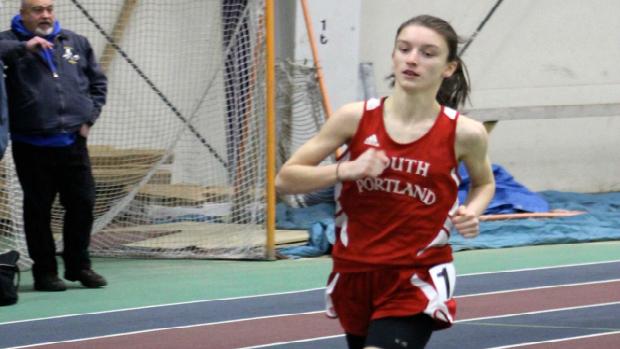 Sophomore Juliana Selser of South Portland sat in the pack in the Class A 800m before unleashing a furious kick to win the state title by 3 seconds. Selser who won the 800m title outdoors a year ago, placed 7th in the New England meet in the 1000m. We caught up with her to talk about her preparations, her trust in her kick, and if we'll ever see her move up to the mile

To deal with the pressure and emotions I yelled at my family the night before and was a complete wreck. I get really nervous and stressed before even regular meets, so before the state meet I was sort of a mess. The day of I focused on my strategy, and the 4x800 helped to settle my nerves.

You used your strong kick to blow away the field over the last 200m, did the race go according to plan for you? Did you know if you kept close you would be able to your speed at the end to win?

For this race I knew that if I stayed behind Malaika Pasch I would have a good chance to win because she is really good at pacing herself. I also knew that I had one of the strongest kicks in the field, and used that to my advantage. The race played out as planned, Malaika and Tiffany Tanner kept a really strong pace and I tried to relax and stay with them until the last 200 where I just went for it.

You've now won the outdoor/indoor 800m titles, any chance we will see you move up to run a mile outdoors?

I enjoy the faster races, such as the 800m and the 400m. I don't really see myself moving up to the mile, although I may run it once to see what my time would be. I want to really focus on the 400m, the 800m, and the 200m this outdoor season. The 400m is actually my favorite event.