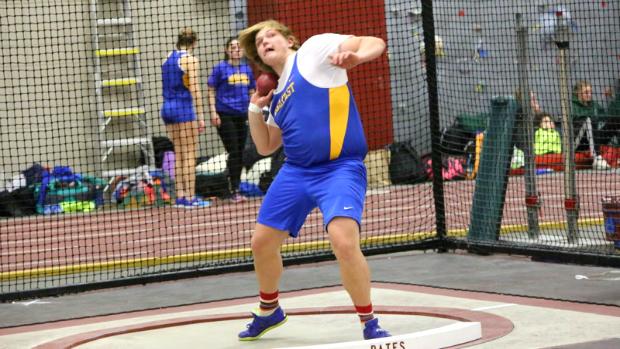 What were your preparations leading up to the state meet?
Well my preparations was a combination of lifting and shot put drills during lunch and after school with my coaches. The few days before the meet we had a lot of snow so I was very limited to my drills I could do but still got them done.
How did you deal with the pressure and emotions that come along with competing in a state meet?
Well being my first ever state meet it was a much different experience than mine norm experiences with my other sports. This was my first sport that's been an individual instead of a team and it was much different. During this meet I felt fairly relaxed because I really didn't know what to expect. I didn't really feel pressure because I was slated to win already, I felt that if I did my job I would be fine. Pressure was very minimal and my emotions were very confused because it was so different than every other sport I've done.
You got off to a great start in the shot on your first two throws which ended up being the two best throws of the competition, what was the key to your success?
My keys to my throws were my coaches and all the extra time I was able to get during lunch and after school. This extra help really allowed me to shape my raw ability. I think working with 3 coaches as well helped me a lot, they all noticed and helped me fix little things to perfect my throw, which still has a lot of cracks in it.
Where you surprised you were able to win the state title?
At the beginning of the year when I first joined track I was not expecting to be a state champion come March.
This was your first season of track, why did you decide to compete? Will you continue to the outdoor season?
I used to do basketball until I stopped my junior year and I was extremely bored last winter having a lot of time on my hands. This winter coach Nealey came up to me and one of my best friends who does outdoor and convinced us to do it because it is fun and will keep us in shape. Many people such as Kylie Nelson and jack Hansen also were big advocates for us doing it so it made it easy to join and few welcomed. I do not believe I will be doing outdoor even thought I really want to, I will most likely continue with baseball.
Coming into the season what were your goals and did you achieve them?

My original goal was to do my best and at least get kvac. I soon found out what my ability was and then my goal became 40 feet. Then 42 feet. Then 45 feet. Then my goal was the school record of 46'9" and to qualify for new England's and win states. I fell short in some but was very happy with the outcome of my first season. It makes me really wish I started track and indoor track sooner in my life because of all the friends I made, all the fun I had & winning.