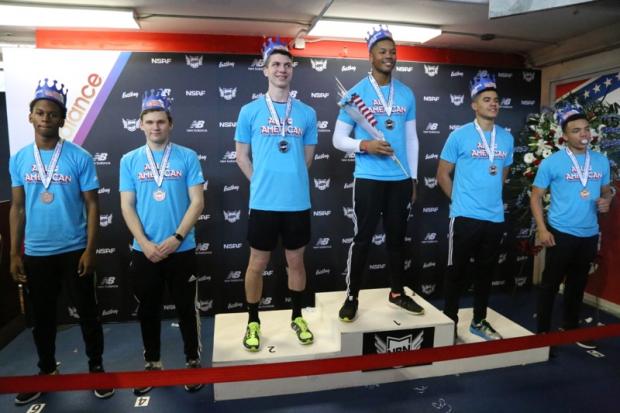 What were your preparations leading up to the state meet?
My preparations for the state meet included a lot of stretching and getting a good warm up the week before.
How did you deal with the pressure and emotions that come along with competing in a state meet?
I learned my sophomore year that you have to take the state meet as any other meet. I just went in and did what I was training for.
You won the 200m in a very close race with your teammate where you were both timed in 22.99, talk about that race, and did you know you had held him off?
I went into the race knowing that it was going to be very close. Flaker in front of me, and Batoosingh behind me. I knew I had to get out harder than I usually do, make sure I don't let up at the end. When I crossed the line I thought I had him by just a little bit, but I wasn't too sure by how much.
To cap the meet off you broke the state meet record in the pole vault with a personal best 16-3. What did it mean for you to get the record?
This record meant so much to me, and I was been about it all season. I came into that event feeling good so I knew there was a possibility of getting it. So I just took it one crossbar at a time until I worked my way to the higher heights.
Coming into the season what were your goals and did you achieve them?
My goals were to win the individual state meet as a team, finally break the 16' barrier in the pole vault, and to get under 23.00 in the 200m.
You went on to finish as an All-American in the Pentathlon, was that a perfect way to end your HS indoor career?
That was definitely the perfect way to end my high school indoor career. It was amazing to compete in that type of atmosphere, with such amazing athletes all around you. Finishing the meet with All American honors was a huge honor.