The thundering herd crossing the soccer field at the Troy Howard Middle School in Belfast signaled the opening of Maine's largest high school sporting event. Over 2000 individual runners entered from 86 schools from Maine, the rest of New England, and the maritime provinces of Canada. It's a huge starting line even though the race is broken down into seven distinct races. 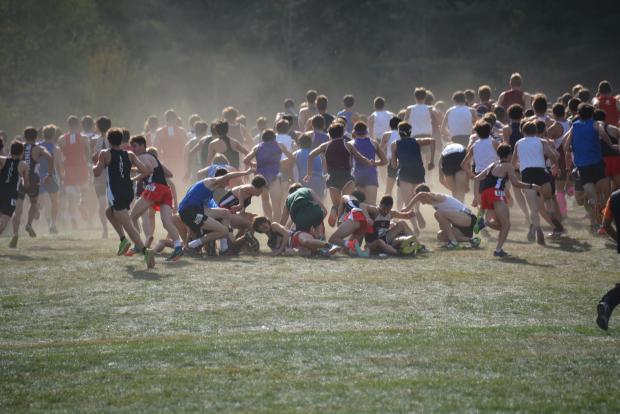 While the team championships were won by out-of-state teams---Concord, New Hampshire for the boys, and Glastonbury, Connecticut for the girls---Mainers had a lot to be proud of as freshman Sofie Matson (18:17.33) of Falmouth and senior Luke Laverdiere (15:10.86) of Yarmouth torched the course to run away with the individual titles. As a first year Matson was eligible for the freshman race but with the fastest qualifying time was instead assigned to the girls seeded race. Matson took the race with a 19 second margin over runner up Sophia Laukli of Yarmouth. Greely's Carolyn Todd took the third spot. 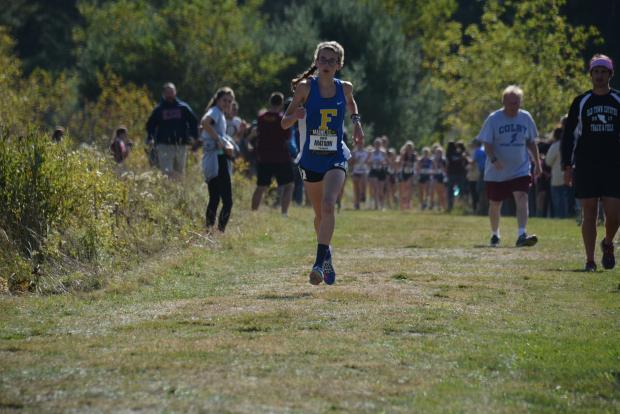 Meanwhile Laverdiere's time was just 4 seconds off the course record and 31 seconds ahead of the runner-up Maximillian Sparks of Canton, Connecticut. Forest Mackenzie of Concord, New Hampshire took the third spot. 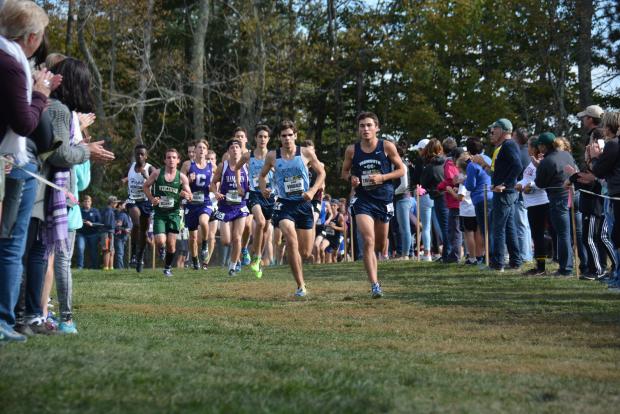 The largest single heat was the unseeded girls with 313 finishers. The other six heats ranged from 221 on up to 315 individuals. By contrast in 2016 the Northern Maine Regional and the State Meets, also run on this course, had 85 and 113 entrants respectively in the Class A girls' races.  Two races of "unseeded" boys sandwiched the largest race, a single heat for unseeded girls. These were followed by a race for freshman girls, and then freshmen boys. The marquee events, the seeded girls and the seeded boys, wrapped the day up. Seeded girls required a season mark better than 24 minutes; for boys the bench mark was 19 minutes.
From the starting line the course traverses a soccer field after which runners are funneled up a gentle incline at about 120 meters. The surface also changes from the close-cut, treated grass of a playing field to the coarse surface of a mowed meadow. Here the size of the race becomes obvious. The ground at the edge of the course vibrates, the air is filled with the sound of 300 pairs of feet pounding the earth. First time spectators gape as the rumble passes up and over the hill out of sight leaving the air filled with dust and grass and smells of disturbed earth. 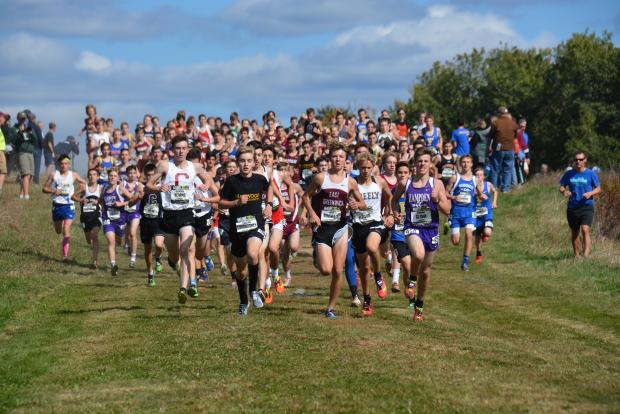 The course traces a brief ellipse across a wide mowed meadow path and then back through a narrowing woods trail before briefly recrossing the starting field in broad S back in front of the starting crowd. It's nearly four-tenths of a mile into the race but the faces of the leaders are still clearly conscious of the avalanche pounding down behind them. In a five team meet at this point a half dozen potential winners have usually sorted themselves from a similar chase pack. But at the Festival of Champions the leaders are still trying to out run a mob. It will be at least another half mile before any strategic jockeying takes place. 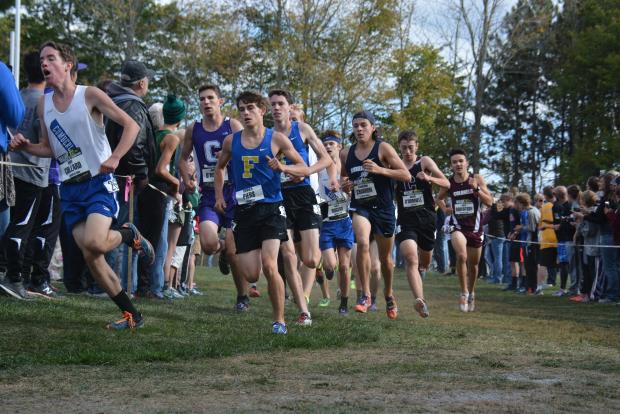 The unseeded boys were split in two equal groups with the slower half (21:30 plus) running first in the "A" race, and the faster group (19:00--21:30) second in the "B" race. The international appeal of Festival was on display in the A race as Connor McDonald, in grade 11 at Colonel Gray High School, Prince Edward Island, took the top spot. MacDonald, with a qualifying team listed as 24:50, won the race in 19:46.59. A converted soccer player, MacDonald was running in his first real cross country race; he began to feel confident in his finish after the "gollywhoppers," an undulating set of gullies closing on the 2.5 mile mark.
Mainer Edwin McLaughlin of Washburn was runner-up, Acme Wasi from Harwood Union (VT) was third. Isaac Moore of Bucksport and Isaac McNutt of Oxford Hills rounded out the top five.
In the second unseeded boys race Gaelan Boyle-Wight, a senior from Telstar High School, took, as he said, "minutes" off of his season's best and clipped 35 seconds from his prior personal best, an 18:14 he'd put up last fall at the State Class C meet on the same course in Belfast. Boyle-Wight is pictured below just past the two mile mark. 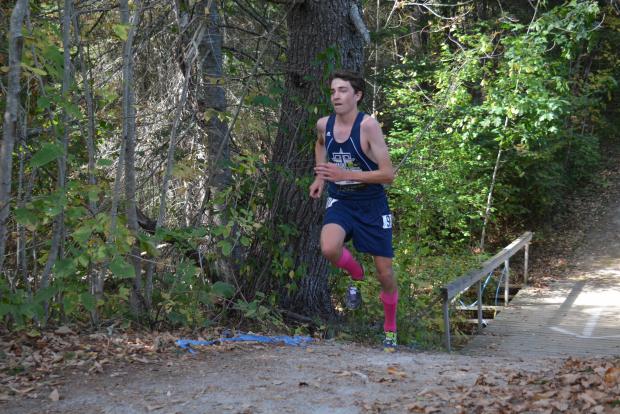 Boyle-Wight's time of 17:30.53 was good enough for 93rd overall in a merged field of 933 runners. He was followed across the finish line by Jesse Bisbee of Harwood Union (VT), Stephen Grierson of MDI, and Zachary Beaton and Braedon Steeves, both of Hermon High School.
Haley Labossiere of Burrillville High School (RI) claimed the top spot in the girls unseeded race with a time of 22:05, just a second behind her was Hannah Tash of Hampden; the top five were completed by Maggie Alberghini of Harwood Union (VT), Cara Hudson of Kents Hill School, and Olivia Watson of Mt Desert Island.
The Freshman boys race saw just one Mainer crack the top five as Gordon Doore of Bangor took that spot. Doore had been led across the finish line by Brayden Kearns of Concord, NH with a winning time of 16:31.36; the runner up, also from Concord was Eben Bragg, Alex Maxwell of East Greenwich (RI) High School was third, and Owen Molis of Cumberland, RI took 4th.
Kearns, who after the race said he felt he had it won at the two-mile mark, had a time of 16:31.36. This time was good enough for 22nd overall in the boys's competition and 4th on the Concord team. Concord won the team competition with just 58 points so there's a good chance the whole squad will be back in Belfast for New Englands on November 11th. 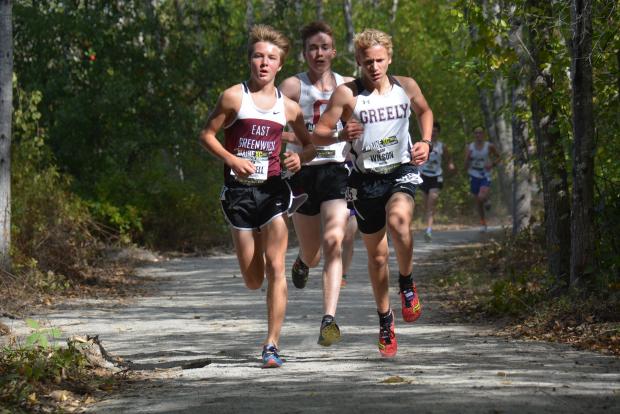 By contrast the girls Freshman race was led by Mainers as first year Karley Piers of Falmouth won the race after beating back an early challenge from Siona Chisholm of John Hugh Gillis Regional High School (Nova Scotia), Chisholm finished 3rd. Piers, who took the 8th spot overall was followed by runner-up Lila Gaudrault of Cape Elizabeth, Olivia Tiner of Winslow was 4th, and Mairin Canning of JH Gillis rounded out the top five. Gaudrault's runner-up finish was particularly impressive as she found herself on the bottom of a pile of runners that fell just after the start.
For Piers, who has put up some sparkling times this year, always to finish behind teammate Sofie Matson, it was an opportunity to win as Matson was running in the seeded race by virtue if having the overall fastest qualifying time. The combination of the fast course and the pressure of needing to lead enabled Piers to crack 19 for the first time with a time of 18:57.76. 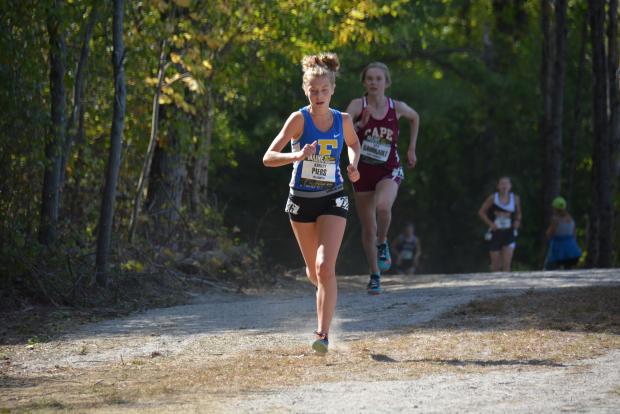 Overall, the course at Troy Howard is regarded as flat, and according to a pre-race jog by rehabbing Brunswick sophomore Will Shaughnessy measured exactly 5K by Garmin. It does, however, have a number of hair-pin turns and several abrupt gullies. The first tight turn comes at about the half mile mark after the runners have crossed the start field twice and are headed off to the meadows and woods trails that make up the bulk of the course. This turn, which is made twice during the race, is a compact horseshoe that loops around a retention pond in a 180 degree turn over a distance of perhaps 65 meters before sending the runners down a woods path. The horse-shoe turn offers runners a solid opportunity to see where they stand: who is ahead and who is behind?
The first time around this loop in the girls seeded race Falmouth's Sofie Matson was able to look back and see a growing expanse of green space between herself and Greely's Carolyn Todd who was leading a very fast moving chase pack. 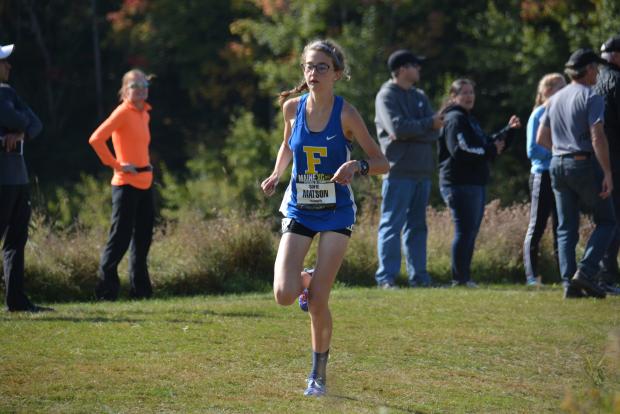 How fast was the chase pack moving? Todd would end the race in 3rd place at 18:47, the junior's best time on a Maine course (her PR is 18:29 was at the 2016 New England meet at Ponaganset High School in Rhode Island where she took 13th). 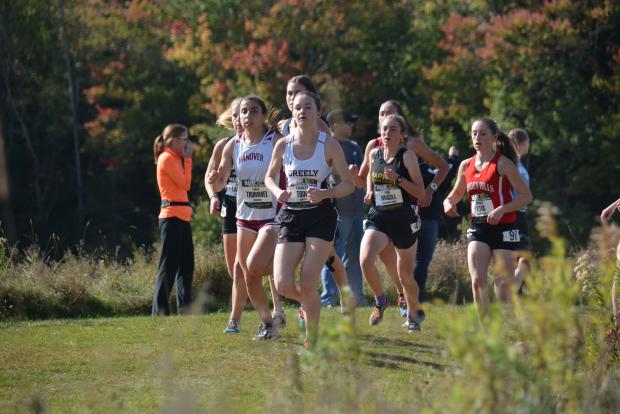 Matson's time, 18:17.33, represents a new personal best for the first-year. The runner-up was Sophia Laukli of Yarmouth (18:36), a senior running cross country for the first season. Todd was 3rd. Grace Iltis of Camden Hills took 4th, and York's Kathryn Miller gave Maine High Schools a clean sweep of the top five girls' spots.
Of course, these five were lucky to be at the front of the pack. In both the seeded races the combination of speed and topography led to a group fall and trampling at about 120 meter mark. With runners flying across an opening flat field the length of a soccer field, the trailing runners cannot see the coming change in elevation. The abrupt shift to an incline and the change in surface causes the trailing runners to stumble. Once one goes down the pile-up is on. There was a brief entanglment at the start if the girls seeded race, and a fairly dramatic wreck at the beginning of the boys race. 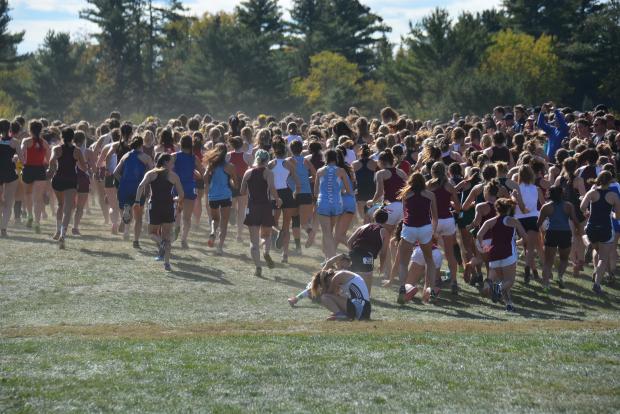 A second area of concern is a series of hairpin turns combined with a plunging gully where the surface has been augmented with coarse sand just around the mile mark. The gully and one of the hairpin turns are repeated in reverse order about 300 meters from the finish. Both corners cause log-jams due to racers changing speeds to safely navigate the turn.
Cleaning up the top five spots was not enough to secure a team victory for a Maine team as the Tomahawks of Glastonbury Connecticut, led by Erin Mcgill's 7th place finish (18:54) took the team title with 115 points. Also scoring for Glastonbury were Angela Bragg (15th), Brittany Anderson (16th), Grace Sparrow (24th), and Alexandra Ross (38th).
Camden Hills was second with 228 points, Cumberland, Rhode Island took 3rd at 240, East Greenwich (RI) was 4th with 278, and Yarmouth rounded out the top five with 284 points
In addition to Grace Iltis's 4th place finish, Augusta Stockman (10th), Miranda Dunton (25th), Alli Wells (91) and Lauren Rothwell (187) scored for Camden.
It's easy to wonder where the Falmouth girls finished with both Matson and Piers finishing in the top 10, but the Yachtsmen finished 16th. Malaika Pasch, a junior who won the Class A Championship on this course in 2016 with a personal best 18:22, continues to rehab from a stress fracture incurred followed last spring's outdoor season. Consistent with past races this season, Pasch started the race but did not finish as she continues to work toward recovery. If she's in any kind of racing form by regionals in three weeks, Falmouth will be competitive.
The boys' race winner Luke Laverdiere (15:10.86) represented Maine in the top five finishers, but out-of-staters filled out the rest of the top five. Maximillian Sparks of Canton (CT) High School took the second spot (15:41), followed by Concord New Hampshires's Forest Mackenzie (15:45), Conor Murphy
(15:51) of Classical (Providence RI) High School, and David Vorbach (15:56) of Nashua North (NH). All five of these results were new personal bests, and among them only Laverdiere had run a sub 16:00 previously.
Concord, with just 58 points, took the boys' title East Greenwich (RI) was second with 123 points, Nashua North of New Hampshire finished 3rd with 139 points. The highest Maine finisher, and 4th overall, was Falmouth with 156 points. Greely took the 5th spot with 243 points.
In addition to Forest Mackenzie's 3rd place finish other scorers for Concord were Nate Nichols (8th), Spencer Oliver (11th), Matt O'Brien (23rd), and first year Brayden Kearns whose win in the the freshman race gave him the 21st spot overall.
It's a long day with a lot of Champions but not all of them get their names read aloud and a plaque but they do accomplish something special. Some do it without shoes. 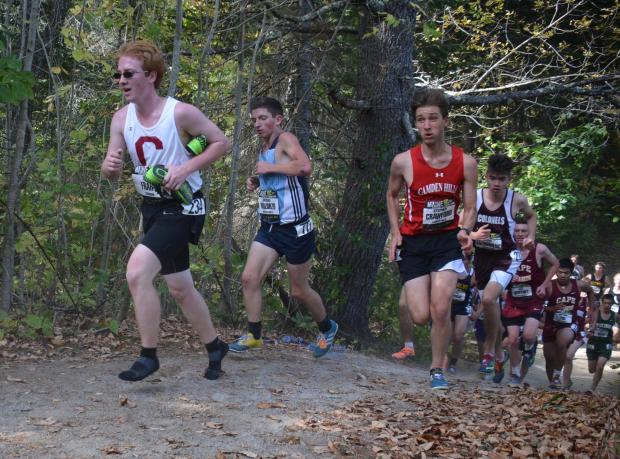 In three weeks, the Northern Maine Regionals will be held on the course at Troy Howard Middle School. The New England meet also comes to Belfast on November 11, 2016 so many of these racers will get at least one more crack at this very fast course.