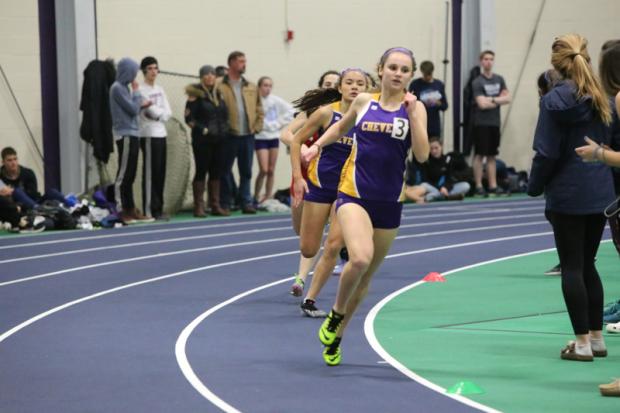 The Class A girls state meet came down to the final event with the Cheverus Stags leading the defending champion Scarborough Red Storm by eight points. Scarborough finished second in the final section, good for the third fastest time of the day but thought they had lost the title, but Deering who had finished ahead of them was disqualified for a line violation which gave the Storm enough points for the tie.

It was the first state title for Cheverus on the girls side, while the Red Storm added title eighteen.

Cheverus was lead by sophomore star sprinter Emma Gallant who tallied twenty eight points. Gallant set a state meet record in the 400m with her winning effort of 57.80, the time erased the ten year old record of Clare Franco of Brunswick (57.88). The mark is also the second fastest in state history. She would add a 200m title later in the meet clocking an indoor personal best of 25.94, which moved her to sixth fastest in state history. Earlier in the meet she was the runner-up in the 55m (7.34).

Pushing Gallant in the 400m & 200m was freshman teammate Victoria Bossong who had herself a strong day as well scoring twenty-two points. Bossong's runner-up effort in the 400m was 58.51, which moved her to ninth fastest all-time. In the 200m her 25.96 broke the freshman state record, and is the seventh best in state history.

Jumper Emma White helped the Stags cause with sixteen points between the long & triple jumps where she was the runner-up. She leaped 17-1 in the long, while getting out to 36-4 in the triple. She also added a point in the 55m hurdles.

Sophomore Anna Gardner was the runner-up in the pole vault as she cleared 10-0.

Bethany Sholl might have been the difference for Scarborough, she was seeded seventh in the 2 mile, but ran a gutsy race to finish fourth. That finish put Scarborough in position to have a chance to win in the 4x200m.

Gorham opened the running on the track with a state meet record in the 4x800 with the team of Meadow Fortier, Iris Kitchen, Kate Tugman, & Anna Slager, they clocked 9:43.02 to erase the 12 year old record of Scarborough (9:45.51).

Westbrook's Nyagoa Bayak was the other record breaker on the day as the junior broke her own record of 5-7, with her 5-8 clearance. Bayak also won the triple jump with a mark of 36-5 1/2.