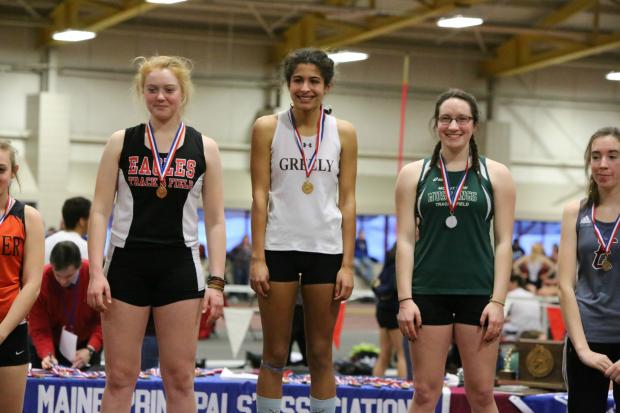 What were your preparations leading up to the state meet?
I rested for three days leading up to the state meet, as I was having some knee pains on my plant leg and wanted to make sure I was fresh for the state meet. Some light cardio and approach drills were part of my regiment on the days that I did practice.
What was one thing that you focused on this winter that made a difference in your performance?
The goal I had from the beginning of the season was to win. After having a pretty successful outdoor season being the runner up in high jump, I wanted to push myself and prove to myself that I could win with hard work and determination.
You jumped 5-2 to win the high jump title, what did it mean to win your first individual state championship? What went right on meet day?
To win an individual title as well as a state title with both our boys and girls team in my senior season is a feeling that really can't be put into words. The day before states, the team had talked about doing it for each other and really putting everything on the line to clinch the title. So to be one of the first winners of the day for the team meant a lot. I had faulted twice at five feet and on my last jump I visualized myself on top of the podium and knew that I didn't want the day to go any other way but that way. My coaches say I'm a better jumper when I'm mad, so that put a little fire under my feet.
Coming into the season what were your goals and did you achieve them?
My goal from the very beginning of the season was to jump 5' consistently and win states, and fortunately I was able to do both of those things!
If there was one event you haven't done that you would like to try what would it be?
I've dabbled in all field events and a few running events. I'd love to go back to pole vault or shot put. I loved shot as a freshman and a sophomore and would love to try it again. I don't think I'm cut out for any distance running, though maybe a short sprint like the 100 or the open 200 could be in my future.
What have your coaches meant to your success?
Coach Folan and I have become close over the past four years, and he has always given me the tough love and support that I've needed to become both a better athlete and person. Coach Sawyer, my first jumping coach, retired at the end of my sophomore year and came back as a volunteer assistant this year with his daughter Kaley. They have both been extremely supportive and motivated to help me do well, and I'm certain without those three in my corner pushing me to well I wouldn't be the athlete I am today.