Leading up to Saturday, September 8th a lot of focus was on the Hoka Southern Maine Classic. After all, the speedy course at Gorham rivals Belfast for fast times and nothing sets hearts aflutter like an early season personal best.

But there was plenty of speed up Route 1 at the Quabacook relays in Bath. In fact the two fastest girls 5Ks to date were there in Cape's Lila Gaudrault and EL's Jillian Richardson. And the duo did not disappoint in the marquee girls race of number one team seeds. The pair ran together for most of the race and exchanged early leads. Gaudrault entered the track for the final 200 meters with a lead she only surrendered at the final turn. Richardson claimed the number one race, and the overall title for the second consecutive year. Her time over the 2.6 miles was 15.28, just besting Gaudrault who finished in 15:30. 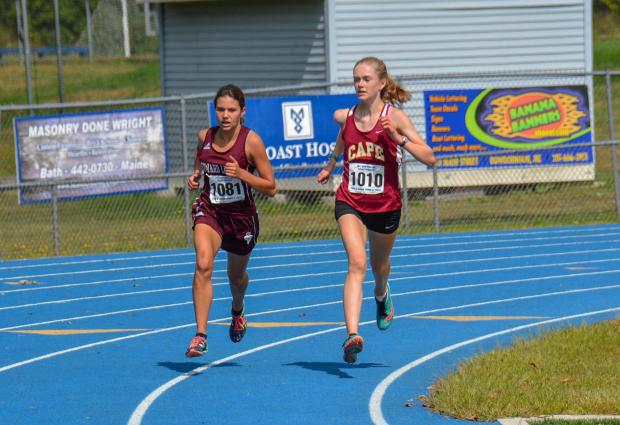 But Gaudrault's Capers prevailed in the overall standings as her second place finish helped the Capers to a team total of 12 points, and the championship plaque. The Capers ended the day with three-first places, three-seconds, and a third. Mt. Ararat followed with 19 points and the York girls finished third with 25 points. 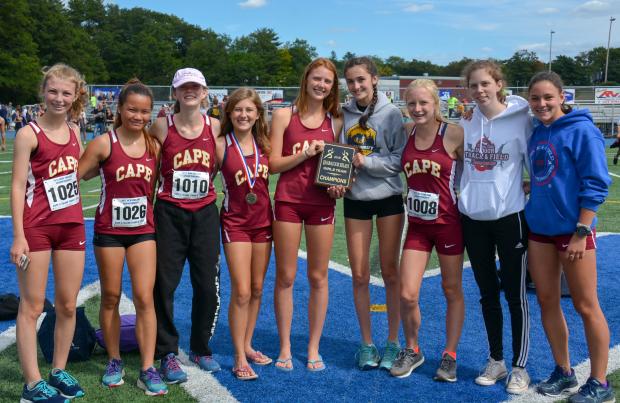 Pure head-to-head racing is featured. Eleven schools participated in the third running of the Quabacook. Seven separate races pitted the varsity runners against one another other according to their ranking within their team. The number seven seeds run against one another, followed by the six seeds and so on until the marquee match-up when the number one seeds toed the line. In the varsity races the boys and girls run together, Quabacook also features a jayvee race.

Team scoring is calculated by adding the places of each runner within their heat. So the lowest possible team score is seven.


In addition to the two fastest girls in the state to date, the Quabacook included the defending state champion in boys cross country, Mt. Ararat's Lisandro Berry-Gaviria, and the fastest freshman and sophomore to this point, in Brunswick's Joey Valliere and Tyler Patterson. Berry-Gaviria defended his 2017 Quabacook title taking the number one race in 13:34 besting Brunswick's Will Shaughnessy and Cape's Jack Bassett.

Brunswick's depth had them in position to challenge for the top spot in each race and the Dragons easily collected the team title by taking firsts in four races and seconds in the other three to end the day with just 10 points. Cape finished second at 18 points while Mt. Ararat was close behind with 19. 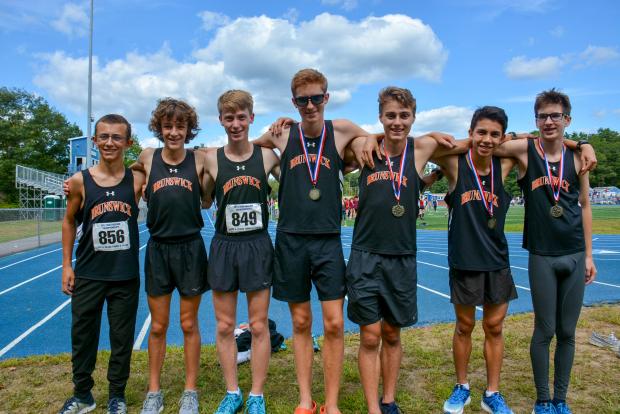 The course itself is a two loop, 2.6 mile, circuit over a modified figure eight that features two substantial hills, each of which is climbed twice. One hill climbs a root filled wooded dirt trail whose primary redeeming quality is the shade. The second hill-the "big" hill-is man made, the result of leveling two distinct areas for playing fields. The climb is abrupt and rises about thirty feet at about a thirty degree incline. The runners climb it, circle a ball field and then head straight down the incline, before traversing about one hundred meters on the level before heading up the woods hill. A circuit around another practice field brings runners back to the start. At the end of the second circuit the race heads on to the McMann Field track for the final 200 meters to the finish line.

Running first, the seven seeds for the boys gave a solid prediction of what the rest of the day would hold. Brunswick senior Daniel Lyons jumped out to a lead that he would build to more than a minute over the 2.6 mile course, he finished in 15.29. Running smoothly the whole time Lyons was followed by Keegan O'Grady who took second for Cape Elizabeth (16:34). Mt. Ararat's Luke Page (16:40) finished 3rd.

Eva Morris got the Capers off to a good start as the first year spent the first half of the race in the company of York's Leah Hultstrom before taking the win by 24 seconds. Cony's Jillian Brown ran third.

Nominally closer than the 7th race as the margin of victory was 23 seconds, the result was never in serious doubt as Brunswick's Aiden Simmons looked comfortable the entire race as he finished in 15:23. Cape Elizabeth again ran second, as Owen Patry finished the course in 15:46. Lewiston's Tyler Freeman took the third spot (16:15). 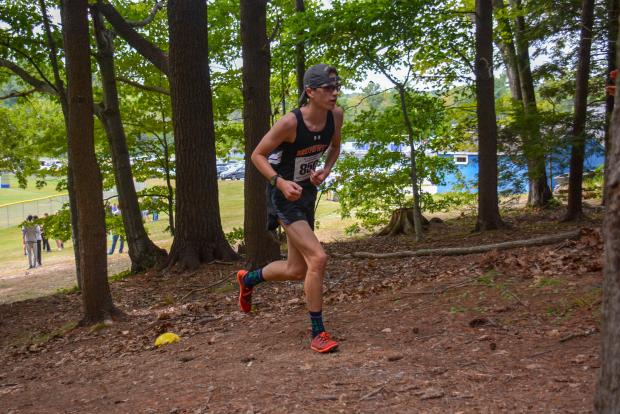 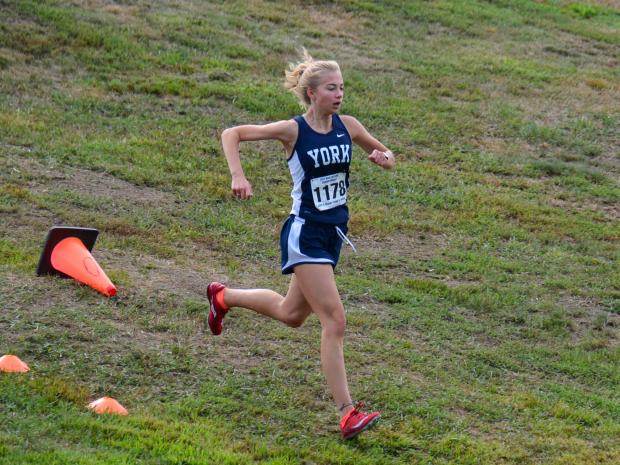 Andrew Chingos, a junior, made it three in a row for the Brunswick Dragons. Again, Brunswick was hardly challenged as Chingos's time of 14:54 was more than half a minute better than the host team Morse Shipbuilder's Connor Freeman (15:28). Freeman also provided the Dragons a little breathing room between the dragons and the Capers as Cape's Vaughn Lindeneau took the third spot (15:55). 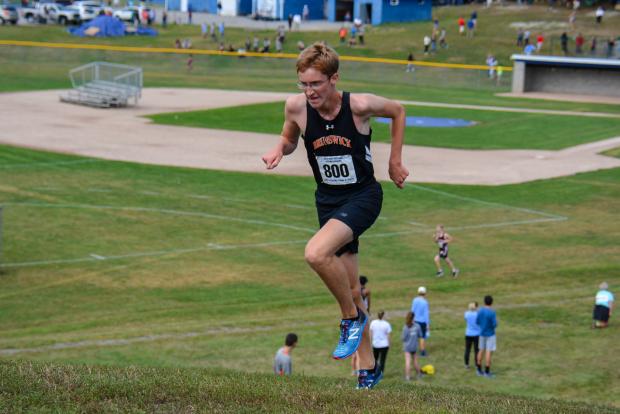 Mt. Ararat's Faye O'Donnell muddied the girls team results considerably by taking first in the girls race. In what was the closest race of the day to this point, O'Donnell (18:24) had to use her closing speed in the track to pull away from Grace Kirk (18:28) of Cony with just about 100 meters to go. This race had the hallmarks of a nail biter from the beginning. During the first loop O'Donnell ran in close formation with Cape's Mary Cate Hayes, the eventual third place finisher, and York's Sophia Newton. But in the second loop Newton had been replaced in the trio by Cony's Kirk, but the lead threesome was just as tightly bunched, running in synch. 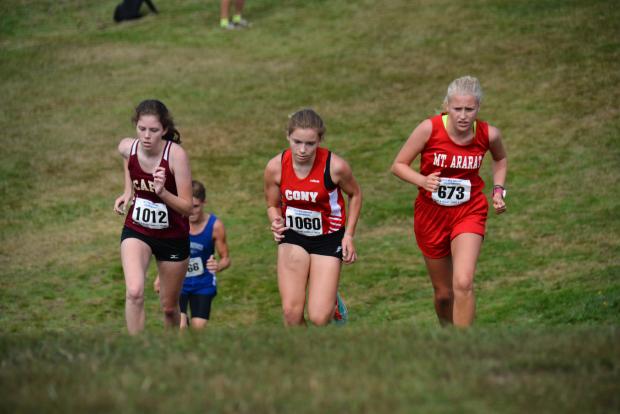 Lucas Bergeron of Mt. Ararat finally burst the Brunswick bubble in the fourth race as he edged the Dragon's freshman Joey Valliere. The times as reported to sub5 are wrong as Valliere had led by small margins or run shoulder to shoulder with Bergeron for the whole race. It was only when the duo arrived on the blue McMann Field track for the final 200 that Bergeron moved away. Bergeron won by mere meters. Aiden Willets kept Cape Elizabeth in contention for the team title with a third place finish. 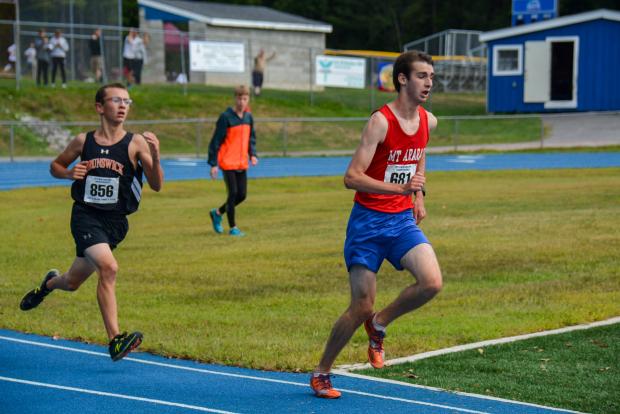 Mt. Ararat's Sara York gave the Eagles a sweep of the fourth race and two consecutive wins on the girls side. York had a convincing sixteen-second margin over the second place runner. But points are points and the second place finish taken by Cape's Zoe Evans was just as valuable as if York had had to lean through the tape to win. York High School stayed in the mix as Erin O'Donnell collected third. 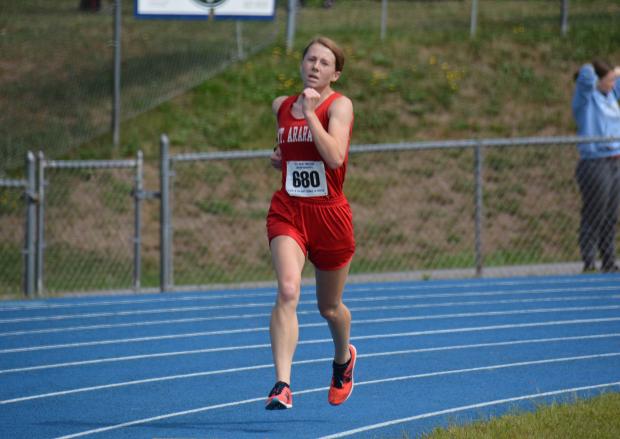 Cam Ashby collected Brunswick's fourth medal of the day in the third seeds race clocking in at 14:16 to best Mt. Ararat's Andrew Chamberland (14:40). Ashby looked strong the whole race and after the second time up the big hill used the flat around the ball fields atop the hill to stretch his lead to six-seconds. Morse's Connor McNish place third. 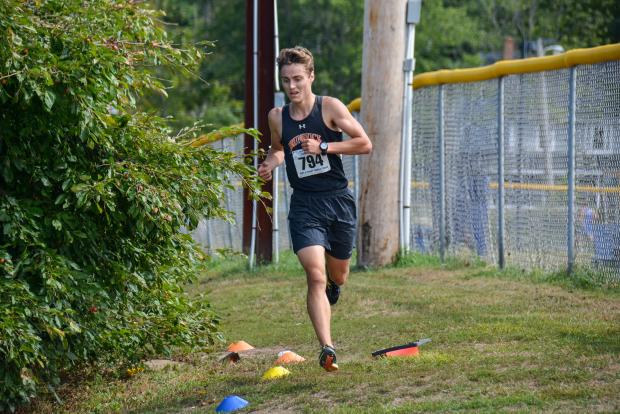 The Cape Elizabeth girls got their second win of the day when Kelsey Kennedy clocked a solid 17:28 to best Mt. Blue's Brynne Robbins, a first year. Robbins took Mt. Blue's highest finish in the meet in this race, but the Cougars looked generally solid as their runners finished in the top half of all the races. The Cougars top seven includes three-first years and a sophomore but they ran with an assuredness that has to be comforting to the coaches. 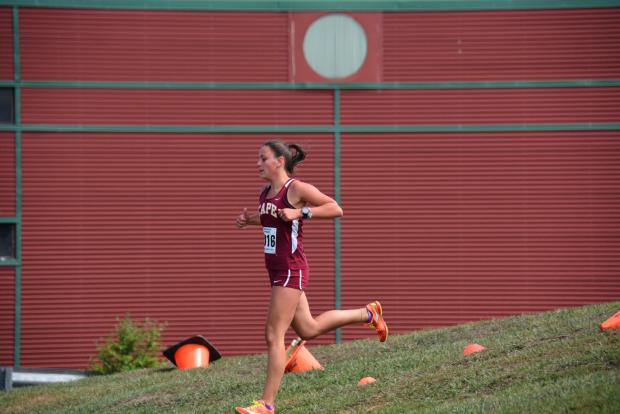 Helping to pin down the girls title for Cape Elizabeth senior Camilla Grosso took the third medal   and second in a row. Her 16:45 bested Mt. Ararat's Karli Leighton (17:13), and another freshman from Mt. Blue, Emma Charles (17:35). Charles ran with Leighton, a top ten finisher in the 2017 Class A Championships, for much of the race. 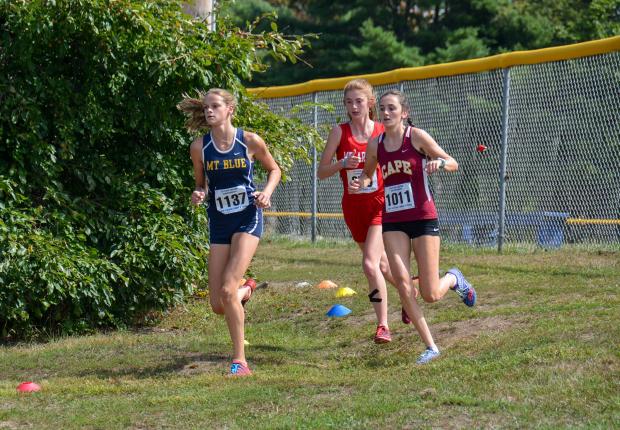 Peter DiNinno of Cape Elizabeth, Brunswick's Tyler Patterson and Nate Cohen of Mt, Ararat ran a three man race for the first two miles before DiNinno and Patterson made it a two man race for the last 600 meters or so. DiNinno built a bit of a lead just before the runners re-entered the track for the final 200 where he was able to stretch it out to win at 14:01, edging Patterson by 3 seconds. 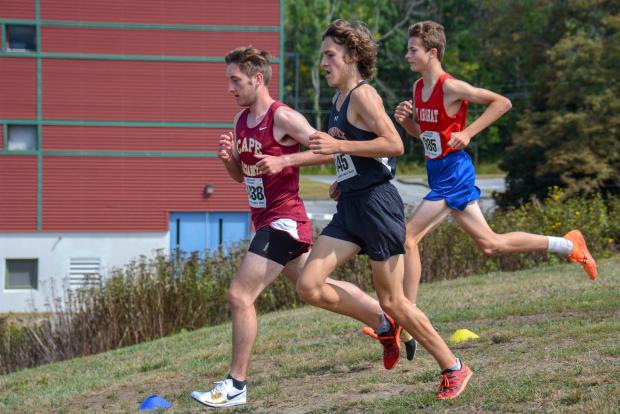 The first seeds delivered what the crowd had come for. The three top male finishers came in under 14 minutes and the top two female finishers broke 15:30. Last year's champions, Lisandro Berry and Jillian Richardson defended their titles. 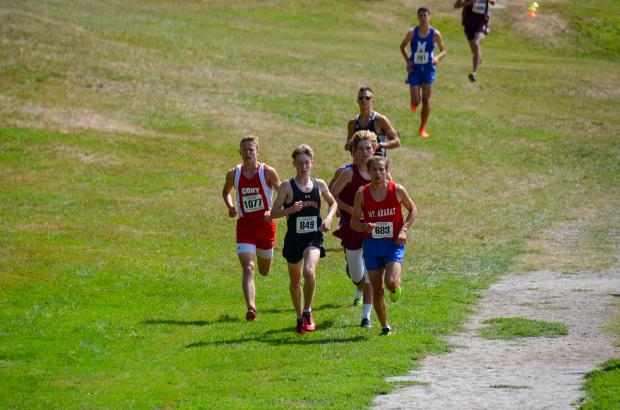 After collecting the team plaque with her Cape Elizabeth teammates runner-up Lila Gaudrault talked with Milesplit about the race. With it's two steep hill climbs it presented a significant challenge Coming into the race Gaudrault was aware that she and Richardson had put up the two top times so far this season. She made her move to take the lead at around the two mile mark. But with teammates and coaches keeping her informed she knew Richardson was not going away. When Richardson reappeared at her shoulder with 100 meters to go Gaudrault knew the Richardson had it because "my kick isn't that great."

When this week's "Who Won the Week" column is generated, the 19:06 and 19:07 that Gaudrault and Richardson held to lead the state last week will be well down the leader board but the hill work put in at Quabacook will serve them well at their Championship meets at Twin Brook and Cony later this season

The junior varsity race featured 56 runners in the boys race and 50 in the girls race. It was scored like a conventional cross country race. In the boys race Cape Elizabeth (22 points), able to put six runners in the top ten, claimed the top spot, followed by Brunswick (52) and Mt. Ararat (78). 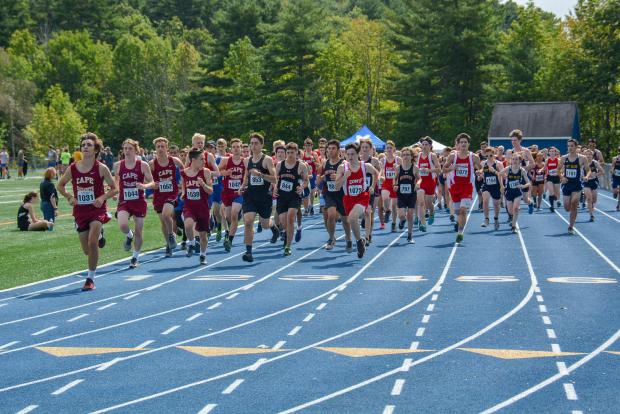 There were some strong individual performances with Brunswick's Chris Tucker scorching the field by nearly a minute to take the top spot. His 15:30.51 would have been good enough to win the 6th and 7th varsity races in the absence of his Brunswick teammates. Ethan Smith led the winning team effort for the Capers. York's Martha McCaddin collected the individual win with a run of 18:58.99, she was followed by teammate Erika Waterbury.

Quabacook is an Abenaki name for Merrymeeting Bay, the body of water where the Androscoggin and Kennebec Rivers meet that defines the communities served by Mt. Ararat, Morse and Brunswick. The race, hosted by Morse, is a joint effort of the three schools. Morse has the facility to host a bug meet like this, particularly as their concessions stand is legendary in the region and with new additions in Cape Elizabeth and York to go with KVAC stalwarts the meet offers rugged competition. But hills need names. Belfast has the Golly-wobblers, and Cony has "The Mountain." The steep incline at Morse needs a name too.  "Dwyer's Peak."