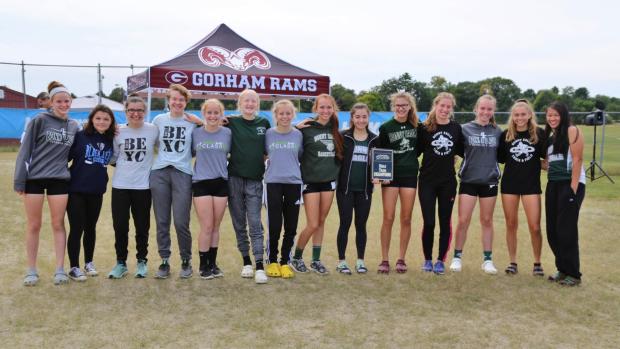 Seven of the top ten teams in the most recent MileSplit50 Team Poll are scheduled to compete on Saturday at the Festival of Champions, including the top three ranked teams. After this meet we should have a clearer picture as to where everyone stands at this point in the season.

The prohibitive favorite is MileSplit50 #1 Bonny Eagle who earlier this year dominated most of Southern Maine with a 32 point victory at the Hoka Southern Maine XC Classic. They placed 7 runners at 20:15.74 or faster in that race.  They have a 1-5 team average of 19:23.12 with a 1:22.60 split. Last time out the Scots running without #6 Christine Toy placed 6th in the Large school race at the Manchester Invitational. The layout at Belfast suits the Scots so expect a fine performance on Saturday

Chasing Bonny Eagle will be MileSplit50 #2 Falmouth who have one of the best top threes in the state. Lead by defending FOC champion Sofie Matson the Yachtsmen also have Karley Piers & Malaika Pasch all ranked in the top 10 in the MileSplit50 Girls' Watchlist. Fourth runner Eva Clement has been a pleasant surprise this fall, she has run a best of 19:47 so far. Fifth runner Kayla Sarazin rounds out the top five, she has improved personal best by over 30 seconds so far this fall, and if she can keep on improving improves Falmouth's chances of an upset.

Last year Camden Hills was the team to beat in Class A, they finished second at FOC only behind out of state Glastonbury. The Windjammers would go on to dominate Class A at the state meet winning by 34 points. With six of the top seven back this fall it was expected Camden Hills would be the favorite, but an injury to Grace Iltis has put a kink into that plan for the time being. Iltis just started running with the team and won't compete on Saturday. Look for Camden Hills to put up a good fight on Saturday led by Augusta Stockman.

MileSplit #5 Orono will get its first chance to see the schools from Southern Maine to see how they stack up. The defending Class C team champions are led by the duo of Erin Gerbi & Camille Kohtala come into FOC with a 21:11 team average. The Red Riots have always run well at FOC, and you can expect the same this year.

Cape Elizabeth enters FOC as MileSplit50 #6, the Capers were on of the few southern Maine teams to bypass Southern Maine XC Classic, so where they stand is still up in the air. Cape will look for big days from Lila Gaudrault & Camilla Grosso in they are going be in the mix.