As we near the end of 2020, many of us will be glad that this year will soon be behind us. COVID-19 wreaked havoc upon us all in one way or the other; whether the effects were peripheral or front-and-center in our lives, this year will be etched in our minds for decades to come.

And although 2020 was for athletes and coaches alike not what they expected or wanted, there were still numerous amazing stories and triumphs by Maine athletes.

Let us look back at the stories, videos, and images that made 2020 a year of perseverance.

While COVID-19 was starting to spread the indoor track and field season was in full force. On January 4th, Ben Greene of Falmouth ran one of the fastest flat track 800m times in state history with his SMAA record 1:56.73, he defeated state indoor 800m record holder Mahamed Sharif of Westbrook in a thrilling come from behind victory.

The season kicked into high gear at the Dartmouth Relays as several Maine athletes recorded victories. Josh Bradford of Falmouth won the shot put with a personal-best 61-2 1/4, the fifth-best throw in state history, at the time it was the best throw in the country. Cheverus sophomore Frank Morang was a double winner taking the long jump 21-7 1/2 and the triple jump 44-2. Senior Jarett Flaker of Scarborough dominated the 300m race winning in 35.18, he combined with teammates Jayden Flaker, Parker Killiard, and Zach Barry to win the 4x400 in a time of 3:29.48. Other winners on the boy's side were Ryan Gendron of Gorham in the high jump (6-2) and Mahmed Sharif of Westbrook in the 800m (1:57.70). Scarborough finished third as a team with 28 points.

The girl's action at Dartmouth produced several winners and record-breaking performances. The Cheverus sprint duo of Emma Gallant and Victoria Bossong each won a race. Bossong clocked 57.16 to win by over three seconds. Gallant took the 300m race in a time of 41.27. The Gorham sprint medley relay of Sydney Connolly, Nevaeh Moore, Alyvia Caruso, and Kate Tugman ran 4:20.08 to break the state record en route to a runner-up finish. Tugman won the 1000m (3:03.98) as well. Windham's Hannah Langstaff won the 800m race in 2:25.10 out of section two while Scarborough senior Emily Labbe won the 55m hurdles (8.61). Gorham finished fourth as a team in the meet.

Later in the month, Jarett Flaker of Scarborough broke his own state record in the 400m clocking 48.57 at the Terrier Classic where he finished fifth against pro and collegiate runners. He also added the second-best 200m in state history with a 21.98 despite falling at the start. Younger brother Jayden ran 50.18 for 400m the seventh-best in state history.

Conference championships action started off February. In the SMAA the Gorham Girls and Scarborough Boys won titles while in the WMC the Wildcats of York swept the titles. In PVC action it was a clean sweep for Bangor in the large school meet, while Ellsworth boys and Bucksport girls won small-school titles. Over in the KVAC, the Lewiston girls and Brunswick boys won Class A titles, while the Belfast boys and Winslow girls won Class B league titles.

Next up was the Class B state meet where the Brewer girls and York boys repeated as champions. On the girls' side, Lexi Brent of York won the 55m hurdles and the 800m, while Leavitt's Aaliyah Trask was a double winner taking the 200m and 400m dashes. On the boys' side, William Carrolton of Morse threw a personal best 55-1 1/2 to win the shot put, while Yarmouth's Chris Koskinen cleared 13-9 to win the pole vault.

The Class A state meet produced plenty of excitement as the Bangor girls held off Gorham and Cheverus for the team title. Bangor's Alyssa Elliott won the long jump and triple jump to aid the Rams title run. Victoria Bossong of Cheverus had a tremendous meet winning the 55m, 200m, and 400m. Bossong set a state meet record in the 400m.

In the 800m, Anna Folley of South Portland battled Mia-Claire Kezal running a personal best 2:16.60 to break the Class A state meet record. Gorham's Kate Tugman was a double winner in the mile and 2 mile.

In the boys' Class A meet Scarborough stormed to its fifth straight team title. Jarett Flaker led Scarborough winning the 200m and 400m as he came back from a hamstring strain.

Mahmed Sharif of Westbrook had the building exploding with cheers as he dominated the 800m in a Class A record 1:54.60. While Mt Ararat's Lisandro Berry-Gaviria set a new Class A record in the 2 mile with a 9:20.99. Brunswick's Ben Drummey also brought plenty of excitement with his 16-0 clearance to win the pole vault.

February closed out with the New England Championships where Victoria Bossong ran to a runner-up finish in the 300m to break her own all-time state best with her 39.59 and placed fourth in the 55m. Kate Tugman ran to a runner-up effort in the 2-mile clocking 10:51.24 and was fifth in the mile. On the boys' side, Sammy Cenescar of Brunswick was the runner-up in the high jump with a 6-5 clearance.

The states best prepared for the New Balance Indoor Nationals meet as COVID-19 started to hit pandemic levels throughout the country. The NBIN meet was canceled on Thursday, March 12th the day before the meet was scheduled to kick off. On Friday, March 13th the Maine Principal's Association announced the spring athletic season would be on hold until at least April 27th due to COVID-19. 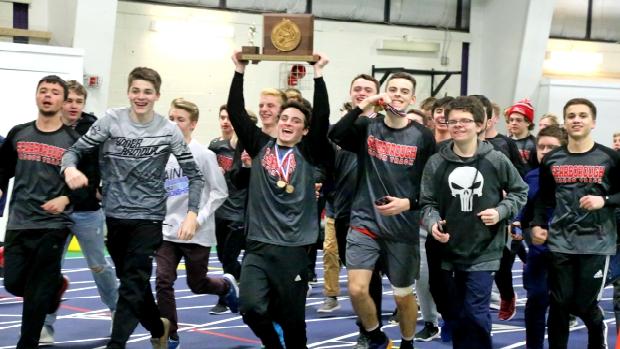 With the outdoor season on hold, we looked at the top indoor programs for both boys and girls over the last ten years. On the boy's side, Scarborough set it's self apart from the rest of the state. While on the girl's side the Stags of Cheverus came out on top over the last decade. We also took a look back at some former Maine high school cross-country and track and field standouts, first up was Luke Fontaine of Cony. On April 9th the Maine Principal's Association announced the cancelation of the 2020 athletic season. With the season canceled we took a look at what could have been in the spring of 2020. We highlighted the senior cross-country and track and field athletes with our yearly "Salute to Seniors" series, we were able to feature thirty different athletes. May also saw us continue to feature former Maine high school standouts, we featured Emily Durgin, Kourtney Bonsey, and Levi Miller. With the season shutdown the Maine Online Track Conference was launched for coaches, there were several excellent sessions including Ian Wilson's presentation on the high jump. Like we did in the winter we looked at the top outdoor boys and girls program in the state over the last ten years. On the boy's side, Scarborough was the top program while on the girl's side Cheverus took top honors. 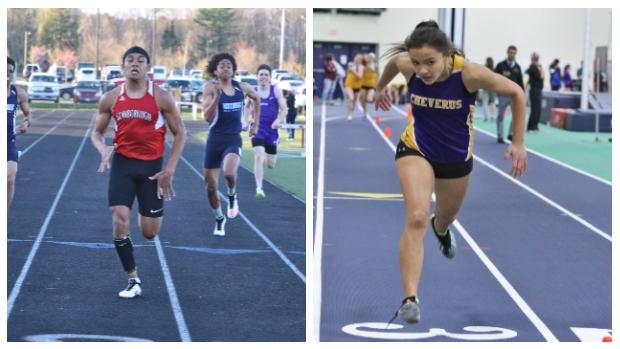 As a final look at the class of 2020, we did a feature article on the three-year progressions of each athlete. We also launched the Maine MileSplit Track Madness competition to select to top Maine boy's and girl's outdoor track and field athletes of the decade. The voting took place throughout the end of June and finished up during the third week of July. In the end, Victoria Bossong of Cheverus and Jarett Flaker of Scarborough was voted the athletes of the decade. We also looked at the best programs in the state for each state championship events to see which excelled in each. COVID-19 continued to make things difficult as the fall athletic season was pushed back to September 8th the last week on July 24th.

In August we started looking ahead to the cross-country that was still in limbo, we highlighted the top returning teams and individuals across the state. On the track Scarborough's Jayden Flaker competed in the AAU Outdoor Track and Field Championship in Florida, he won the national title in the 110m hurdles for the 15-16-year-old age group. His time of 14.42 is the third fastest ever run in the state of Maine and was a new sophomore state record. On August 27th, the Maine Principals Association was given the heads up to conduct a fall athletic season, cross-country which was a level 1 sport would be able to have competitions with restrictions.

Despite restricting the number of teams that could compete due to state regulations the Maine Festival of Champions meet went off with great success, Bangor's Erin McCarthy and Hampden Academy's Abbott Valentine were individual champions while the Rams of Bangor swept the team titles. The fastest 5k's of 2020 were run at Brunswick where Ben Greene of Falmouth clocked a personal best 15:43 while Sofie Matson took the girls race in 17:37.

The MPA announced the state championship meet would move from Belfast to Bangor due to Waldo County being designated "Yellow" by the state.

KVAC Class A state qualifying meets were split into South and North races then the results combined. Tyler Patterson who won the South race posted the fastest time of the day in Class A, and the Bangor boys dominated the team race. On the girl's side, Erin McCarthy of Bangor won the North race with the fastest time of the day leading her Rams team to a convincing victory. 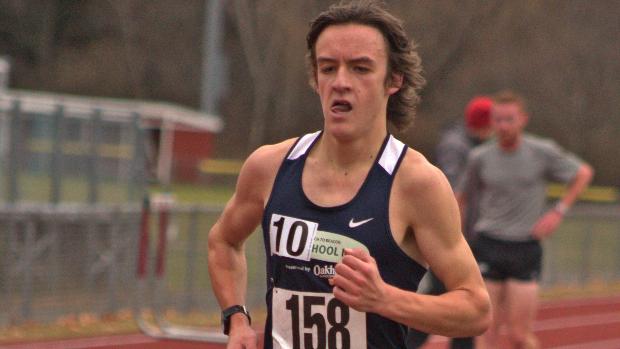 York County was the last county to complete their state qualifier they were left not able to practice for much of the fall due to a "Yellow" designation by the state. Thornton Academy's Simon Dimatteo won the boys race with the Kennebunk boys winning the team race. In the girl's race, Jaclyn Vanderhoof of Thornton Academy crossed the line first while the Marshwood girls won the team race.

With the state meet field set athletes went through final preparations and then the state of Maine changed the rules stating masks had to be worn during competitions. On November 9th the MPA canceled the state cross-country championship meets due to rising COVID-19 cases, and the new mask mandate. Several athletes took advantage of their fitness to compete on the track in a variety of time trials. Brunswick's Tyler Patterson broke the 5k outdoor track record with a blistering 14:51.66

November closed out with several standout athletes making their college commitments to continue their academic and athletic excellence all across the country.

December saw the indoor track and field season get underway with practices with the restrictions of 50 people indoors the chances for any traditional meets are out the door. Also with several counties in a "Yellow" designation, they are unable to practice in person. We decided to preview all the returning athletes in each event to give them recognization.

2020 was certainly a challenging year on many fronts, but I wanted to thank everyone for continuing to support the website and reading the coverage of our great sport. Hopefully 2021 we will be able to return to normal once again with meets happening all across the state and with our athletes producing outstanding performances and teams being able to compete for conference and state titles. Maine MileSplit wishes you all the best in 2021.