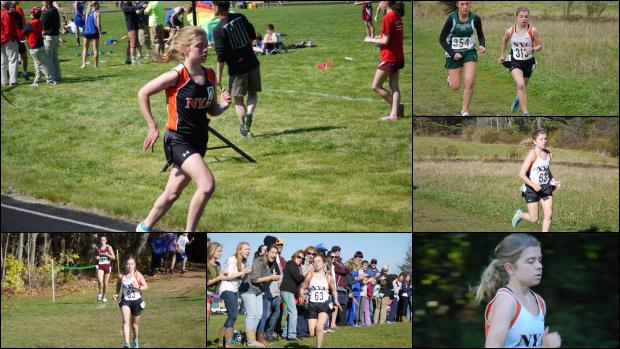 Follow North Yarmouth Academy senior Hannah Austin during her senior indoor season. Austin finished third in Class B 2 mile a year ago, and returns as one of the individual favorite to win 2 mile title this winter. While she is small in stature she certainly makes up for with her grit & determination.

For me, it's been an action-packed past few weeks, starting back with the Saturday after WMCs. My coach, my dad, a few of my teammates, and I all went down to Boston to watch the New Balance Grand Prix meet. It was so amazing to be there and watch so many really talented athletes run/jump/throw! I especially enjoyed the high school miles. I'd heard of most of the girls running it, and knew they were really fast, so it was really great to actually be there watching them race! The atmosphere at the meet was so exciting as well; there were people with cameras everywhere filming the races and interviewing the athletes who won their events. It was such an amazing experience; if any of you get the chance to go in upcoming years you definitely should!

Next up was States the following weekend. The first event I did was the 4x8 relay. My teammates and I really wanted to get on the podium in that race, but ended up placing 11th. However, we all tried our hardest on that day and will try again in the outdoor season! Next for me was the 2mile. Though I was pretty disappointed with my race, I came out knowing what went wrong and what I need to work on in my upcoming races. Even though they can be hard, it is often the bad races that I learn the most from. Though this day didn't go quite as I personally wanted it to, it was still great (as always) to watch my teammates and friends from other schools do well, which many of them did. Also, after the meet is over, my team always goes out to dinner at a nearby restaurant, which is really fun. We always order a couple really huge ice cream sundaes, which each take around 10 people to finish off!

A few days after States, I found out that I had made New Englands for the 2mile, which led to yet another really fun trip. My dad, my coach, and I went down to Boston again Friday morning for the meet. When it was almost time for the 2mile to start, I warmed up with my friend, Anna Lastra from Fryeburg, which was really fun! After we warmed up, we checked in together and waited for the race to start. The actual race was again not what I was hoping for, but now I am ready to put it behind me and start getting ready for outdoor. Anyway, going to New Englands for Indoor track was still an amazing experience, and a goal I'd had for myself since sophomore year. After New Englands, we spent the night in Boston and then went to the Heps Indoor Track championship at Harvard. The Harvard track facility is really nice, and just like at the Grand Prix, it was great to watch so many talented track athletes. I also saw my friend Kirstin Sandreuter there, who was watching her Cornell teammates compete! It was a great day hanging out with her and watching the meet. Then, the next day, my coach, my dad, and I went to Boston University to watch Henry Sterling, an alum from my school, run the mile in a field full of really fast milers. He ran really fast and was one of the top runners in the race! Overall, this past weekend was amazing!

I can't believe the indoor season is now over for most of us. Though for me it did have many disappointments, I feel as though I have learned a lot from it and in the end it will help me to grow as a runner, and just like last season, I still had a great time spending time with my teammates and friends. Thanks so much all of you, for making this season one I will always remember!

I hope all of you who are done for the season are happy with what you were able to accomplish and are ready to do well again in outdoor track! And to those amazing few of you who are going on to compete at Nationals in a couple weeks, good luck! I know you'll do really well!