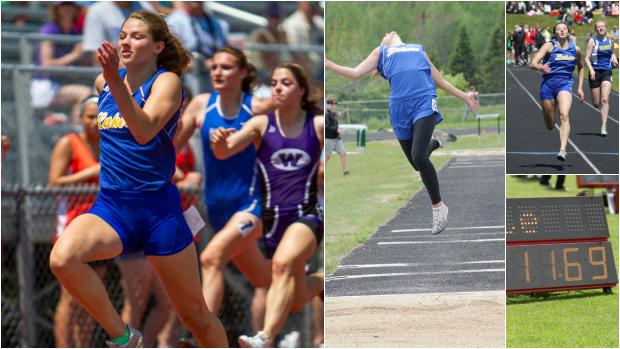 Follow Lake Region HS sprint/jump star Kate Hall as she blogs about her senior indoor season & the quest to be the best. Hall is one of the top ranked returner long jumper in the US this winter. Her accolades are impressive, she has never lost a state championship race or jump a perfect 20-20 so far. She currently holds Maine State Indoor All-time bests in the 55m, 60m, 200m, & long jump. Outdoors she holds all-time best marks in the 100m, 200m & long jump. Last winter she was the National runner-up in the long jump at the New Balance Indoor Nationals.

Hello once again! I hope everyone who went to New England's had a great meet!

All season long two of my top goals were to set the all time New England record in the 55m and long jump. I had been so close all season (jumping 20-1, and running 6.99.) I knew in my mind that if I was going to do it, it would be at the New England meet where my body was in peak condition. Not only that, but I figured there would be no better time to do it than the New England meet itself.

I was dealing with nerves for this meet weeks before it happened, although at the same time I had honestly never been so excited to run and jump because I knew I was ready to show everyone what I could do.

I was having a hard time calming my nerves before I ran the 55m, my first event. I'm pretty sure I was shaking as I got into the starting blocks. I don't remember the last time I was that nervous. It was the last 55m I would ever run, and my last chance to set the record. My nerves definitely affected my performance in that event considering I had one of the worst block starts ever. My prelim time was 7.06, an average time for me. I knew for the next race, if I could just relax and take some deep breaths in the blocks, I would be okay. Once again, I had trouble doing this and had another horrible block start. In my mind as I was running as fast as I could in the finals, my mind flashed back to two years ago in this exact race. I had a bad block start once again, but in the last ten meters I came back, won the race, and set a huge PR. I thought to myself during the race, "I'm not losing this. I've been working for this all year." I felt myself catching her, and in the last few meters, I barely caught her and won. Honestly, at first, I thought I didn't run a very fast time because of my bad block start and almost losing. When I saw the 6.95 appear on the screen above, I put both my hands on my head like I always do when I set a PR, and began crying. I had beaten the record by .01 of a second and I couldn't have been happier.

Immediately after I saw my time, I had to run over to the long jump. I was so overjoyed at this time that I didn't care what happened in long jump. I had already accomplished a goal I had been looking for all year. Actually, before the meet, I was telling my dad and trainer how I was hoping I could do the 55m first. If I could run it first and break the record, then I knew it would relax me going into long jump. Being relaxed is just what I needed, too. It enables my steps to become accurate and just the flight itself to feel almost effortless. I hadn't done a run through to check my steps for about an hour, so my first jump was going to be a jump just to see where my steps ended up. As always, my first jump was about two feet behind the board. It came out to 18-1. I was fine with that considering I knew exactly what to do for my next jump. Move my mark a foot forward and come out of the start powerfully. From doing this, I was right on the board and jumped 20-2. My parents and coaches knew it was a good jump considering the grin on my face. I looked up to them and held up the number two with my fingers. I was about a half an inch off of the record. I knew I was going to do it though; I still had four more jumps. My third jump I fouled. I never, ever foul so I surprised myself when I did this. I almost wanted the officials to measure just to see what it was anyways because it was a HUGE jump. Definitely my biggest one of the day. If i had to guess, I would say it was probably in the upper 20s or even 21 feet.

I was on to the finals next. Usually in the finals, my first jump isn't very far because of the break. I wasn't going to let this happen though. I moved my mark back a few inches and took off. I was right on the board. As I saw them pulling the tape and 20-6 appeared, I grinned widely once again to my parents and coaches. However this time, I was going to leave them in suspense and wait until they put it up on the performance board instead of telling them immediately. When they put it up, they all cheered and hugged each other. I couldn't believe I had broken my second record of the day.