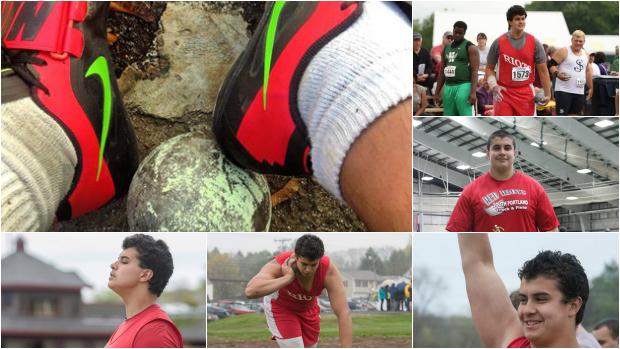 Check out "Throwing Deep" a blog by South Portland thrower Daniel Guiliani. Guiliani was the Class A shot put champion outdoors and finished second in the New England Championship a year. Follow his journey to break the state all-time best this winter.

I finally did it. I went up to UMO last week and broke the All-Time record in the shot put with a 62'4" throw at the Maine USATF championship. I was in absolute shock when I heard the measurement. My series went 60'10", 61'10", then I fouled out the front. My last throw I knew I had to put everything together and stay in the ring, and I had a lot of power and speed, but I was very controlled at the end. It was a very good day, and I won't forget it. That mark moved me to #6 in the country, and a top spot for my class.

Some unfortunate news I have is that I won't be able to compete at the national meet next week due to a severe wrist injury. A high amount of swelling and pain, so I'll be taking this time to let it heal back up to the point where I can start throwing again, and then really train hard. It's really too bad that this had to happen, because I had been throwing 65+ throws in practice, and felt that In all honestly, I could've had a shot at possibly winning.

On another note, I achieved my main goal for the year and I can't argue with that big mark. I have some new goals for outdoor as the first meet will be in approximately 7 weeks. My first goal is to throw over the 65 foot mark (or more). Second goal is to defend my state title in the shot put, I learned my lesson about how titles aren't just given too you, even if you're the first seed, and I'll be more prepared mentally as that meet comes along. My last goal is to move up one more spot and Win at New Englands. I had a great meet last year, but I'll obviously be much more competitive now than last season and plus the 54'10" mark has me returning at the top of NE. So these are some long term goals I'll have on my mind as the year progresses.

I had a lot of fun this season. I learned a lot and improved a huge amount from last indoor. I had a lot of fun with my team and it won't be the same with all the seniors this year leaving. I was very happy to be voted as a captain from my team. I hope to be as good as a leader as the captains were this season,and help out younger throwers on our team, and get them to reach their full potential. Im really looking forward to getting back to training and really going for it when outdoor begins, but most importantly, cherish the moments I have with others on the team this spring, and build memories.

I'm really looking forward to competing with the other throwers this season. In my opinion, Maine this year has been one of the most competitive when it comes to the throws, with 7 people over the 50' mark this past winter in shot put. I'm excited to compete with Nick White in the disc, I believe with him in the same meet, I can really get pushed to do my best. Hugh is another guy that's fun to compete with.

I look back from my freshman year to now and first off think about how fast time flys, and second, how I even got to this point in my career. Only throwing 32-4, I though I'd maybe hit 50 my senior year, and now 30 feet later? I feel very accomplished and really hope I can keep this improvement going with my three track seasons I have left.

Thank you for the people who supported me through out the season and I wish the best of luck to all athletes in outdoor, and I hope training through out the offseason goes well!