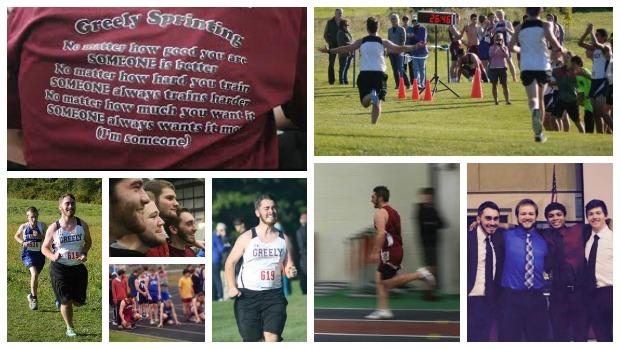 Follow Greely senior Matt Woolverton this spring as he talks about his struggles with injuries, and his battle to overcome them for one healthy season.

After a year of writing I can honestly say that writing these past three seasons has truly changed my senior year. On and off the track. From meeting new people to getting pent up issues off my chest writing the blog this past year has really been a gift. I want to thank everyone who stuck with me and kept reading and to everyone who reached out. It's been really fun and the writing will really be missed.

Catching you all back up from my last post I've decided to commit to Wheelock college in Boston. Being on a team that is centered around family is important to me and Wheelock was the best fit for that. I plan to drop cross country and start working a little more on sprints and throwing. I'm really looking forward to see how another batch of seasons will play out for my health. That being said I'm not going to just stop running because of a couple hamstring tears and some knee pain. I'm going to keep running until I physically can't anymore.

I actually ran my last race last week. I'm only going to be throwing Javelin at WMC's so I knew going into it that it would be my last raceas a Ranger. It was bittersweet to say the least. Being that it was my last race I definitely was pushed a little more. I had a Yarmouth runner tailing me most of the race and I told myself there was no chance I'd let him pass me. I came in second and finished with a fairly respectable time considering my situation. Being that I'm going to run next year it was a lot less difficult than I had anticipated it to be. I ran then I walked off on my own just thinking for a bit. Once I started talking to people again all the sadness of leaving the Rangers had passed and I was ready to move on.

This season has been difficult for me. I was never really got comfortable I think. I told myself I wanted to make my last season count. I didn't want to leave the Rangers unfinished. I think I've done that but I feel as though I've settled. At some point I stopped working as hard as I usually do and I started to coast. I cared more about health and less about this season. Sitting out a practice for precautionary reasons was a terrible decision if you ask me. At the time it made sense to me, stay healthy be ready for collegiate competition. That wasn't fully the case though. I stayed healthyish sure, but I didn't accomplish as much as I'd have liked to.

I'm ready to move on sure, but I want to finish what I've started first. In my time as a Captain at Greely the boys haven't placed at WMC's or States so I haven't been apart of bringing home and hardware. I want to make that happen. Watch out York, watch out Class B. We're ready and on a mission.

Thanks again for all the support, it's been fun.