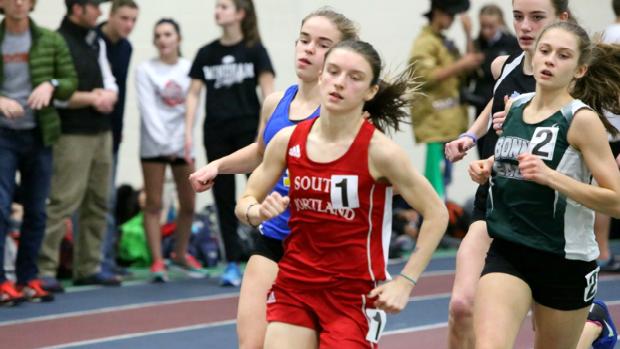 What were your preparations leading up to the state meet?
Leading up to the state meet I did pacing work and longer runs to stay loose, as well as short, speed workouts.
How did you deal with the pressure and emotions that come along with competing in a state meet?
I tend to get very worked up about meets, especially big races. I dealt with it better this year than I have in the past, making sure I got good sleep leading up to the meet, eating and hydrating well, and trying to remain calm and composed. My assistant coach Darryl would give me pep talks that really helped, and my family was a huge support. My head coach, Reardon, was also very helpful because she gives me an objective look at races and race strategies that really help to calm me down. Having my family there to support me also helped to calm me down and keep me focused on the task at hand.
You set a state meet record in the 800m, coming into the meet was that the focus, or where you just focused on winning?
My goal at the beginning of the season was to break that record, and I also wanted to get into the fast heat at New Englands, so this meet was about winning with a good time. I knew I could not hold back and have a sprint finish like I did last year if I wanted to get a time like that, I had to take it out from the beginning.
You finally earned All-New England honors after a couple of near misses, talk about running the #2 time in state history to finish 4th.
That race, I'm gonna be honest, did not feel great. I was so used to running the 4-lap 800m that I didn't properly run the 1000m. I was on the inside and the runners on the double poll went in front of me, so I had to use bursts of energy to get by them. That really affected me later in the race because I didn't have much, or any, kick left which is something that I am not used to. I am extremely pleased with my time, though, and finally being able to stand on the podium (well really I stood next to it) was incredible, and it was also a very good learning experience.
You went on to compete in the 800m at NBIN where you set a new personal best. What was the experience like?
Nationals was like a runners dream. It was like a nerd convention for runners and it was AMAZING!!!! During the actual race I expected them to take it out fast, but not in a 29 like they did. I was running in last place for a good portion of the race and I got boxed in, and with the banks being so extreme I found it difficult to surge around people. I had to really push it in the final 300m to get the 4th place finish in my heat. This was also definitely a learning experience because I now know what it takes to race at these big meets, and it also has inspired me to train harder than before. I was super happy with my time because going into that race my goal was to break 2:15. It was absolutely humbling and intimidating and inspiring and amazing and I didn't really want to leave because it was like a track-athletes dream convention.
Coming into the season what were your goals and did you achieve them?

Coming into the season my goals were to break the Class A State Meet record, make Nationals, make the fast heat for New Englands, podium for New Englands, and break 2:15! I think that I achieved all of my immediate goals this season.