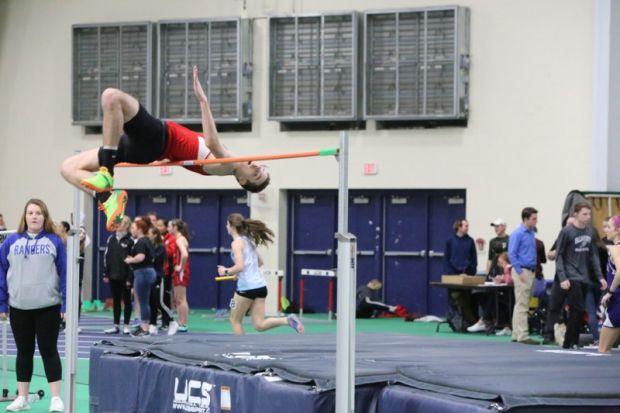 What were your preparations leading up to the state meet?
Leading up to the state meet, the hurdles coach, Coach Ross, told me to do as intense training as I was before the first regular season meet. During the middle of the season, he told me to take the workouts easier so I would not get too tired for meets. Prior to the SMAA conference meet, I set all my season bests in the first meet and had a slow rest of the season. We took a risk and decided to do more intense training for one week before the state meet in order to finally get some PRs. I did not get a PR in hurdles or triple jump, but I was able to get a 2-inch PR in the high jump.
What was one thing that you focused on this winter that made a difference in your performance?
Psychologically, I tried to take the meets and pre-event warmups more casually this season. In the past, I would listen to music and refuse to talk to people before my events to "get in the zone," but I figured that I would be less stressed out and nervous if I simply performed the same warmup routine but had a happier and less tense attitude. I also knew I was a top performer in the state, so I imagined winning a state title and how it would feel. That was enough motivation for me to make it count when I needed it to.
The high jump at the state meet was a close competition with you and Sammy Cenescar, but you were able to pull the upset with a personal best 6-4 jump. Talk about the emotions of clearing 6-4 and winning the title
Sammy is a great competitor and a friendly person, which contributed to how it went. It was extremely close the entire competition and we were both supportive of each other and helped each other. Clearing 6'4 for the first time and then realizing I won the state championship felt like my first Fortnite win. After countless attempts, failures, and hours of work and training, it all finally pays off for an unexpected victory. The emotions that follow a Fortnite win as well as winning a state title are similar in the way that they are so rare that you are just flooded with feelings of overwhelming accomplishment. Unless you are Jarett Flaker.
Coming into the season what were your goals and did you achieve them?
For high jump, I wanted to clear 6'2 and place top three in the state, which I achieved more than I was planning to.  For hurdles, I wanted to run 8.25 and place in states. I ran 8.32 but ended up getting sixth in states. For triple jump, I wanted to jump 41 feet and to place in states. I jumped 41'1" and got fourth in states.  Lastly, I wanted to beat Flaker at least once, but you can guess how that ended. The only time I'll ever beat him is most likely when he fell in hurdles at the last chance meet in 2017.
If there was one event you haven't done that you would like to try what would it be?
I would love to try the 400. I've heard it's such a fun race.
What have your coaches meant to your success?
None of my success this year would have been possible without any one of my coaches. Every coach on the Scarborough staff cares immensely about each and every athlete on the team and does their best to push the athletes to their potential. Specifically, in the high jump competition in states, Coach Veilleux gave me such an incredible yet brief pep talk before my last attempt at 6'4, when I cleared it. He made me realize that everything was falling into place for me and it was the best chance I have ever gotten and needed to make it count. This year, we unfortunately did not have a high jump coach, but Coach Veilleux, Coach Kelly, and Coach Ross are just as knowledgeable as a high jump specialist and did everything they could to push me in all my events. Thank you Coach Veilleux, Coach Ross, Coach Stone, and Coach Kelly for everything this season.