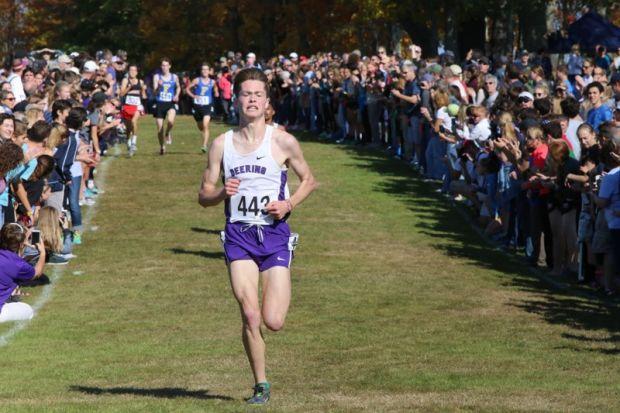 The Class A Boys will get the regional races underway on Saturday in what could be one of the best individual races of the day. The race will feature seven of the top runners in the MileSplit50 latest boys watchlist. With that much talent you would expect the pace to be honest and several athletes more than capable of a sub 17 minute effort.

MileSplit50 #3 John Auer of Falmouth will look to win his first regional title in his senior year. Auer has been very consistent all season long running under 16:12 for 5k four times including a personal best 15:49.70. John has five first place efforts so far this fall, and has been second two others times in his seven races. Auer raced to a sixth place finish a year ago.

Defending regional champion Alec Troxell (MileSplit50 #4) of Deering is one of only two runners to defeat Auer on the season. Troxell has the fastest time of the year for any runner in Maine with his 15:45.90 effort in winning the Southern Maine XC Classic in September. Alec has only raced 5 times this fall so his legs should be plenty fresh for the postseason.

Junior Tristram Coffin has put together his best fall running a personal best 16:06.22 earlier this fall at the Southern Maine Classic, and ran just about the same time for fourth at FOC. So far this fall the Red Storm's Coffin has run 16:30 or faster four different times, and last time out he raced Auer in a tight battle coming up just 2 seconds short of the top ranked runner.

MileSplit50 #10 Jeffery Waters of Massabesic has been one of the most improved runners in the state this fall and will look to improve on his 12th place finish from a year ago. Waters has a best effort of 16:06.50 on the season and has four wins to his credit. In his last three races he has run between 16:34-16:38 for 5k

Kennebunk's Ethan Eickmann comes in ranked MileSplit50 #11 after a strong fall that has seen the junior clock a best of 16:04.90 for 5k. Eickmann finished 14th a year ago in the regional running 17:44. After running a best of 17:30 for 5k a year ago, Ethan has run under 17 minutes four different times.

Bonny Eagle junior Aiden Willey has overcome an early season injury to vault up to MileSplit50 #12 the past few weeks. Willey has a personal best of 16:10 on the season, and has been getting faster each week. He could be a real wildcard on Saturday because of it. Just 25th a year ago at regionals Willey should improve that placement significantly this weekend.

Rounding out the ranked runners is MileSplit50 #15 Luke Marsanskis of Greely. Running on his home course should be advantageous to the senior who ran under 16 minutes earlier this fall with his 4th place 15:56.40 effort at the Southern Maine XC Classic. Luke was the regional runner-up last fall a repeat of that performance wouldn't surprise anyone.

The team race will also be one to watch with five of the top ten ranked teams in the latest MileSplit50 boys team rankings led by top ranked Greely. The Rangers who assumed the number one spot back in early September and have remained since. Having home course advantage should help Greely out as well.

Chasing the Rangers will be MileSplit50 #4 Scarborough,  #5 Falmouth, along with #7 Massabseic & 10th ranked Bonny Eagle. Falmouth is the two-time defending regional champions.

More than likely the team squads will look to do what it takes to make next week's state meet, and potentially sit out any athletes that may be banged up to save them for the state meet.