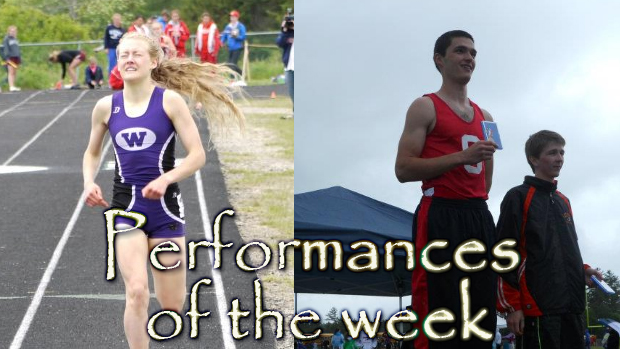 Waterville's Bethanie Brown was selected for the 2nd time this outdoor season as she dominated the distance races at the Class B State meet. Brown broke Class B meet records at the 1600m (4:55.23) & 3200m (10:34.79) as she remained undefeated in the state in 2012. Bethanie played a key role in the success of her team going undefeated capturing their 6th straight Class B state title. Up next for Brown is the New England Championship meet where she is the #1 seed in the 3200m, & also highly ranked in the 1600m. On the boys side Sanford's Dan Webb was a standout at the Class A boys state meet. Webb opened his day with a strong anchor leg to lead his team to the top of podium, he followed that up with a come from behind win in the 400m, as he was the only runner in the field to run udner 50, he would come back to break 23 in the 200m once again showing his strength in the homestretch as he powered past everyone en route to a personal best 22.88. Dan would close out the meet with a runner-up finish in the 4x400. His points were the main reason his team won their first ever Class A boys outdoor track title. Congratulations to both Bethanie & Dan on being selected as the Maine Running Company Performance of the Week