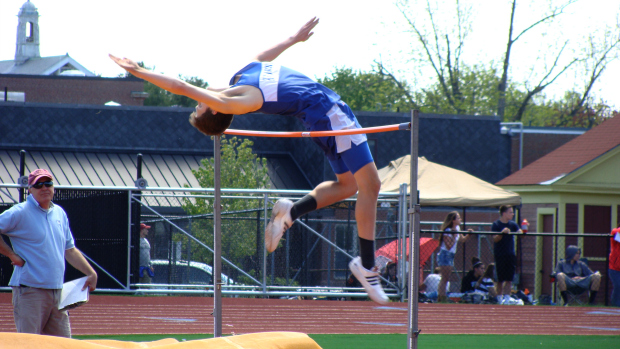 One of my most memorable moments was when I went to NBIN in 2012 for the One Mile Walk with Luc Bourget, Ian Dixon, Adam Robinson, Abby Dunn, and Nicole Court-Menendez. I had qualified right before I received a concussion during wrestling season. Because of that injury, I placed last in a field of 7 and was horribly embarrassed. I find a quiet place to cry about how awful I had performed: I got lapped twice by every single competitor and was two minutes behind the person in front of me. Though this meet was extremely disappointing, the energy I felt was unreal. Going to New Balance made me realize that track was something that I would want to be a part of for the rest of my life, and it encouraged me to do better in the high jump. I would qualify for the Emerging Elite division of the high jump the following year and medal again at both indoor and outdoor states.

Though I've faced some tough competitors, specifically Connor Harris in the high jump, I'd have to say that my biggest competition was always myself. I consider high jump as an event where you are always and only competing against yourself, and other people just happen to be doing the same thing with you at the same time.

I am very prone to injury and sickness. Coupling this with being an asthmatic; having a leg length discrepancy that almost caused me to herniate three discs in my spine; and taking a total of 11 AP courses in high school, balancing track has always been difficult. As a freshman, I had difficulties reworking my approach in high jump to run faster. The mental element of the event was difficult for me to overcome, and when it prevented me from clearing heights that I was more than capable of jumping, I would swear to myself that I would never hold myself back in the event again. That was before junior year and before I had ever cleared 6 feet. 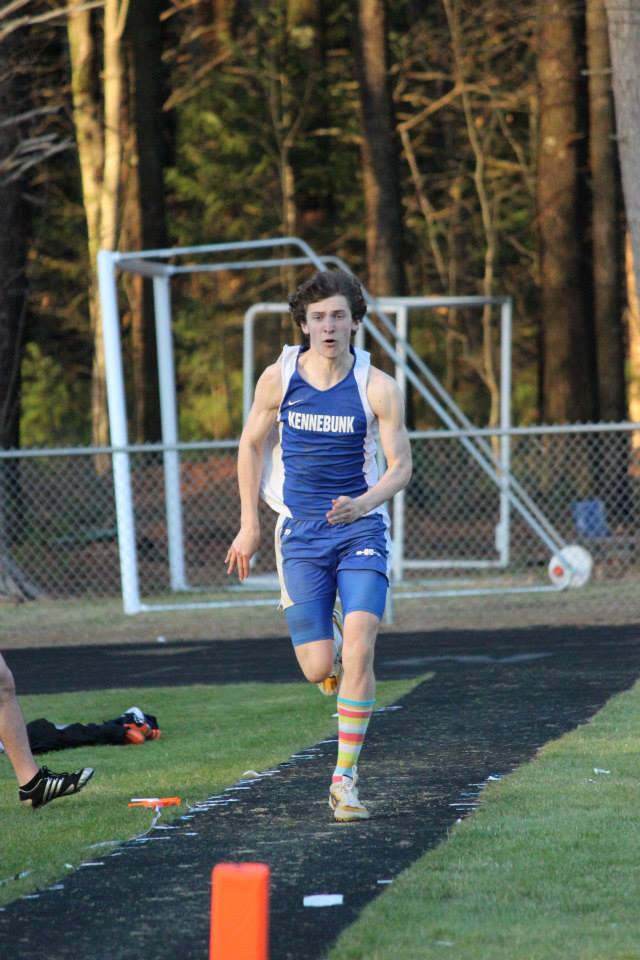 I've had a good share of disappointments and successes during my high school career. Clearing 6-4 for the first time while coming off of an injury was so unexpected, and it made me feel like I could do anything. The consistency that I had achieved in my jumping during senior year is one of my proudest achievements in track, as it allowed for me to enter competition at 6 feet and be the 2014 indoor and outdoor state champion. This consistency was something special: it felt like I was learning something new about high jump every meet and I could feel myself grow as an athlete with each and every jump.

Still, I'd have to say getting a full scholarship to Southern Illinois University was my greatest accomplishment. When I visited campus for an interview, the chancellor said in her welcoming address, “All of your hard work has paid off here.” Out of all of the colleges that I had visited, no one had said that to me; the same is true in track: you always want more. But sometimes you just need to realize that what you've done so far isn't too shabby.

The only thing that I could think of would be to lift weights more. I didn't have the time between academics and extra-curriculars outside of track to go to the gym very often, though I would lift in the summer. Still, I don't think that I would do anything differently because I loved my time in high school so much – it was so rewarding and enjoyable. I may have done indoor track as a sophomore, but I appreciated doing wrestling because it taught me to be more disciplined and be an overall better athlete, albeit did set me back in other ways. The same goes with cross country, it was way too fun to give up.

Aside from my injuries, high jump became difficult because I no longer had a coach after freshman year. I would spend hours on the internet over the summer following freshman year, trying to figure out what I could do to improve, what drills were appropriate during the different phases of a season, what I could do for technical aspects of the event, what plyometrics were the best – how I could help out my teammates who were also without a coach. On top of that, I would have to give myself the confidence to become a better athlete when faced with a higher height, even when I was injured or not feeling too well. It's tough to always be fulfilling and surpassing expectations, but if you set your own based on the quality of your performances, then every jump, every run, every workout becomes fun.

I will miss my team from Kennebunk and Biddeford. Even when I was training with Biddeford during indoor, it felt like I was part of a larger family that was always super supportive. I will miss my teammates, from the group of five that jammed out to mix CDs during indoor season in car rides to the massive dance circles with my outdoor team. At Kennebunk, there is something special with our team, beginning practice with the Word of the Day to the bus rides, free style rapping and other shenanigans that only our coaching staff could acquire a taste for. I wouldn't trade my teammates for anything.

I'll also miss my fellow competitors. There is something special to high jump – and probably other events too – where you become great friends with the small group of athletes you jump against and cheer each other on. The group of high jumpers going to Class A states for the 2012 and 2013 outdoor seasons are a group of people that I've had so much fun competing against. Still, I'll only reminisce in these memories because I know that I am ready to face and overcome the new challenges that lie ahead in my future.

Track can be frustrating. Unlike most other sports, you are always up against yourself and it can be irritating to not hold some number to show tangible improvement. My advice is to set goals early and allow for them to be achieved over time. I've met my goals through a happy combination of over-training that would make me stronger and injured at the same time and under-training that would allow me to focus on the more mental and technical aspects of my event. One of the best ways to learn more about your event is to watch other, especially younger, athletes do the event, and possibly coach them. In doing this I have been able to 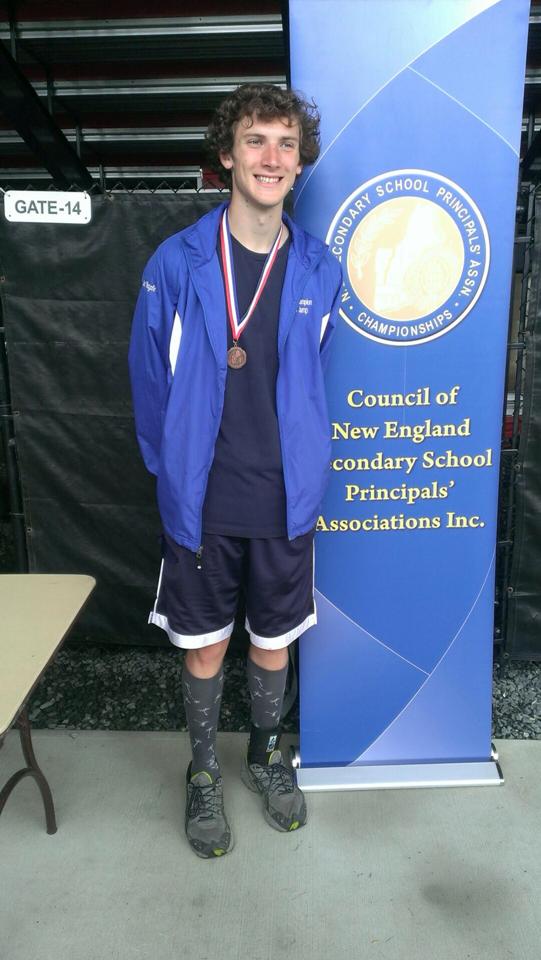 analyze high jump from a multitude of angles, and always feel like an active participant of my favorite event whether I'm competing or not. It helps to be a student of your event. Still, don't let it take over your life. Wear cool socks and have fun. Love what you do, but don't allow for it to shoot you down into depression or some state of anxiety because it's not always worth worrying about.

Throughout high school, I have had 13 different coaches for track and cross country. All of them have taught me different things, but holistically their presence, or lack thereof, has led me to become self-reliant. Coach Dinehart: you've taught me one of the most important lessons in running, and that is you need to be able to accurately assess yourself so that you can train and perform to levels that are appropriate for your present ability and that which you want to hone in the future. Coach Oullette: you've taught me that you can always rely on a coach with experience, because that coach will always be there for you and believe in your abilities. Coach Caitlin: you've shown me so many different perspectives on high jump, I don't think I could ever re-pay you for all of the advice you've given me during my last indoor season. Coach Ryder: you were the first coach of mine to show me how fun track could be and showed me how to gain confidence when I was having trouble as a freshman. Coach Fulford: your collective attitude and commitment to running made me realize that growth happens beyond just a season, and that being realistic pays off. Coach Anna: you've been a coach I could always trust and have helped me develop in the jumps when it mattered most. Coach Drew: you helped me realize that there is a time and place for everything, especially in track. Coach Viola: you've been a great head coach for these past two years and have helped me realize that the team and the self are two separate things, but they work and succeed together.

I will be attending Southern Illinois University in Carbondale, IL next year, studying Plant Biology with a concentration in Molecular Biology and Plant Physiology. I will be jumping there and am excited to see how I will do over the next four years on their track team.

I want to thank my parents and family for always believing in me, for dealing with me when I was ugly and frustrated, for celebrating all of the good times and raising me in such a great way. I did not seriously do sports until 7th grade, where I had not done anything competitive since I was ten. Without their encouragement and help, I would not have been able to realize what I was capable of. My teammates, past ones too, and community have always been so supportive, and I'd like to thank the athletes on other teams that have cheered me on throughout my four years of competing. I'd like to thank Hayley for being everything and more. Thank you to all those people who put together YouTube videos and college coaches who post their training materials online. Thank you Dick Fosbury for the guidance you gave me two summers ago and reminding me of what is important. Thank you to my athletic directors, Thor Nilsen and Joe Schwartzmann, for allowing me to compete indoors. Thank you Arlene for always taking care of me, and Kate while I was at Biddeford. Thank you all Maine officials for making every meet feel so special. Thank you Dr. Carr for manipulating my spine and Saco Bay Physical Therapy so I can still do the sport that I love so much.

Remember what you do best and strive to do it better all the time, because you are your only competition.