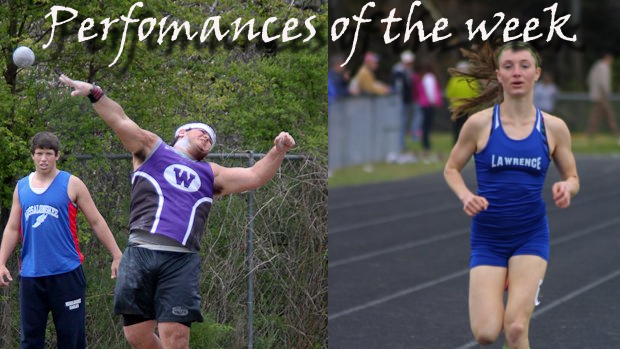 Lawrence junior Erzsebet Nagy had a oustanding distance triple that saw her clock Class A leading times in the 1600 (5:04.59) & 800m (2:17.55), as well as a strong 11:23.94 for 3200m. Nagy was the overwhelming choice of the fans this week for the girls performance of the week. Erzsebet had personal best in the 1600 and 800, & just missed the Lawrence school record in the 800.  The boys selection for the performance of the week was a close one, as Nick Margitza won in a coin toss over Harlow Ladd. Margitza a senior who will be headed for Bates next fall had an outstanding meet winning the shot put with a throw of 52-2 & then launching a state leading and personal best of 147-7 in the discus. Nick currently leads the state in both throwing events, his top shot distance on the season 53-5 3/4. Congratulations to both Erszebet & Nick on being selected as the Maine Running Company Performance of the Week.

Threw a PR of 147-7 in the Discus at KVAC: Waterville, Edward Little, Messalonskee @ Morse, placing first.