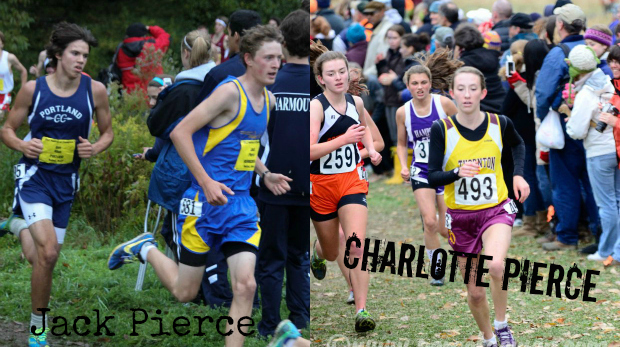 Merriconeag Waldorf's senior Jack Pierce has been selected as the boys winner this week. In a close vote, it was one vote that made the difference as Jack received 12 overall out of the 35 casted. Pierce who has had a very consistent season of fast racing continued that last week with a 16:23 clocking at Royal River Park in Yarmouth. Jack won another race while his margin of victory was 1:38. With the post-season in sight look for Pierce to contend for WMC, Regional & State titles.

On the girls side Thornton Academy senior Charlotte Pierce has quitely been having an outstanding season, this past week was an example of her excellence as she clocked a 18:59 to win at Smiling Hill Farm. Charlotte's winning margin was 42 seconds. Pierce has been undefated all season in SMAA action, and she is the favorite to win the Western Maine regional title in 2 weeks. This week Pierce received 21 of the the 49 votes to win by a comfrotable margin.