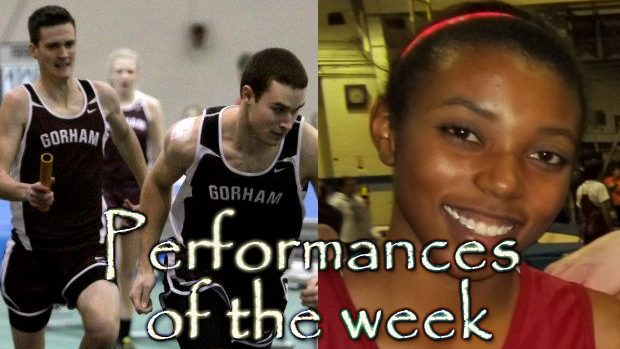 The Maine Running Company Indoor Track Performance of the Week voting is complete for week #3. On the girls side new PVC long jump record holder sophomore Tiffany Gray (Bangor)edged Sarah Perkins of Gorham by two votes to earn top honors. Gray popped off a huge personal best in the long jump 17-4 3/4, the mark broke the PVC league record held by former Brewer standout Jen Puiia by 1/2 foot. Tiffany is ranked #1 in the state in both the LJ & TJ. In the triple she hit a NBIN emerging elite mark of 36-0.   On the boys side for the first time a relay team was selected as the winner, the Gorham Boys 4x200 team of Ryan Baillargeon, Austin Bell, Brandon Cushman & Nate Bucknell set a new SMAA open 4x200 record with their state leading clocking on 1:35.22 in the final regular season meet of the SMAA season. Gorham has set the standard high in the 4x200 this season as they also have the fastest Jr. 4x200 & Sr. 4x200 Relay times heading into the Southwesterns in two weeks.